Details: Compatibility:
This premium case is specially designed for your precious Samsung Galaxy Tab A (2017, 8.0") Model# SM-T380 /SM-T385. This MoKo case features a combination of functionality and style. Product Description:
Folding cover case, lightweight and protective, easy to use.
Automatically wakes or puts your device to sleep when the lid is opened and closed.
The high quality material with fine process boosts a classy and stylish look.
Convenient stand position for watching movie or typing, give you a comfortable angle to view, let your hands free.
Precise cut out and openings for buttons controls and cameras allow for easy access, allows you to control all features.
Provides maximum protection for your valuable device. About us:
This product is sold exclusively by BSCstore. Only buy from BSCstore to get genuine MoKo products with Lifetime warranty and superb customer service.
MoKo is registered trademark of BSCstore and is exclusively distributed by BSCstore on Amazon. MoKo trademark is protected by US Trademark Law.

Thanks for your review! it will be published soon. Thank you! your review was submitted
JB
Thus far I can't complain. It's a simple case that does exactly what they advertise. After about a year, it's held up great with semi regular use.
Is this helpful?
Elizabeth
I purchased this cover as I have the exact same one for my Asus 10" tablet. That one did not fit exactly and the company replaced it with another one with the corrected cutouts. I like to support folks who do a great job and stand behind their products. This is for my Samsung Tab A 8". Really nice feel, easy to clean as all vinyl. Looking forward to taking on vacation soon. Thanks Moko for another great product.
Is this helpful?
RW
This is a good case and all things work as advertised. Hence the 4 star review. I got what I ordered and it worked as advertised. It also seems reasonably sturdy for the cost.That said, there is no typing angle position other than flat (basically 2-3 degrees elevation). If you're good with that (see pics), then for the money, this is a good case.I will keep this as a backup case as it has some blemishes after a week of use, however I ordered an "upgrade" that costs more but also has a typing angle position (and a hand strap too). 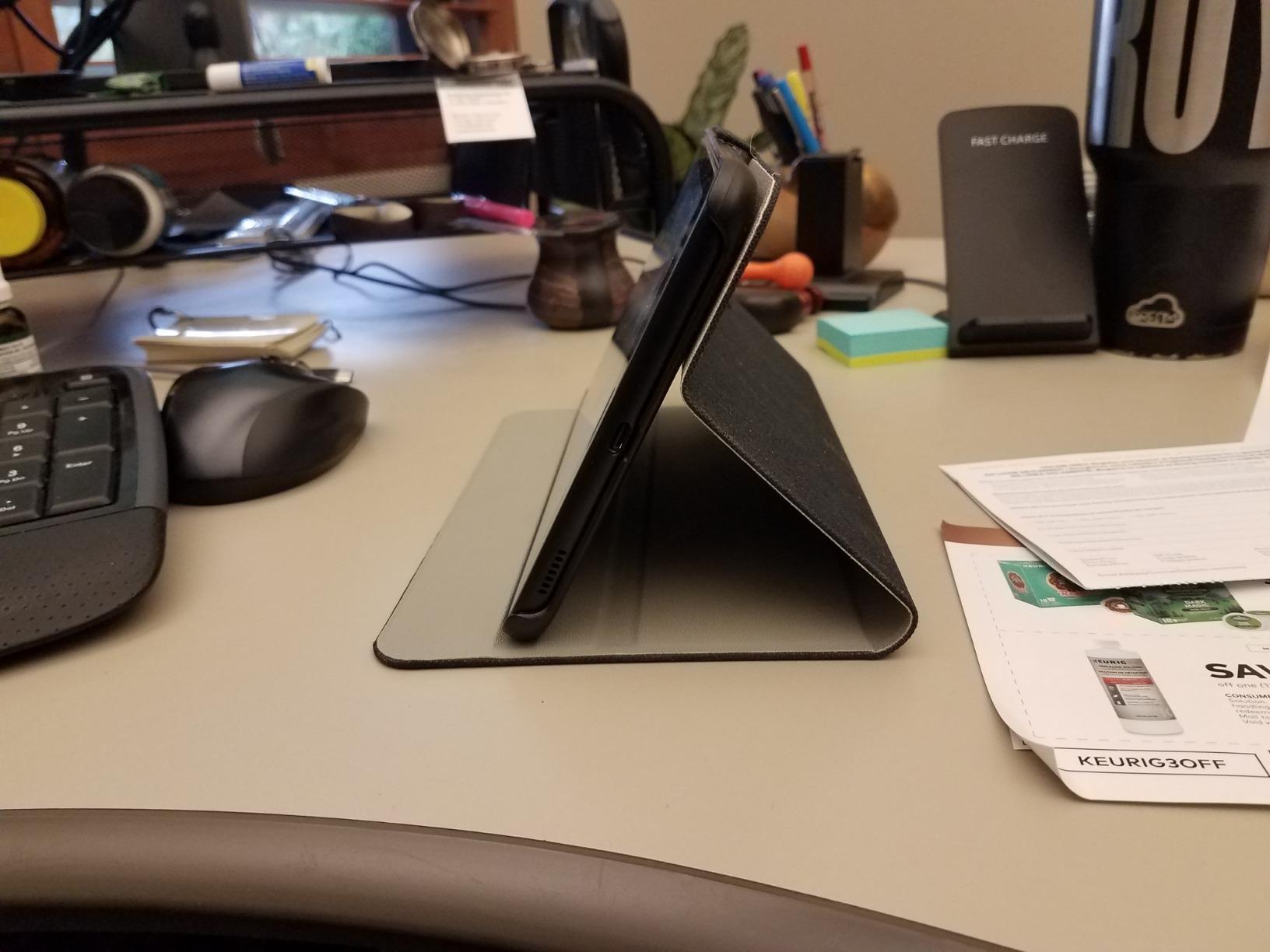 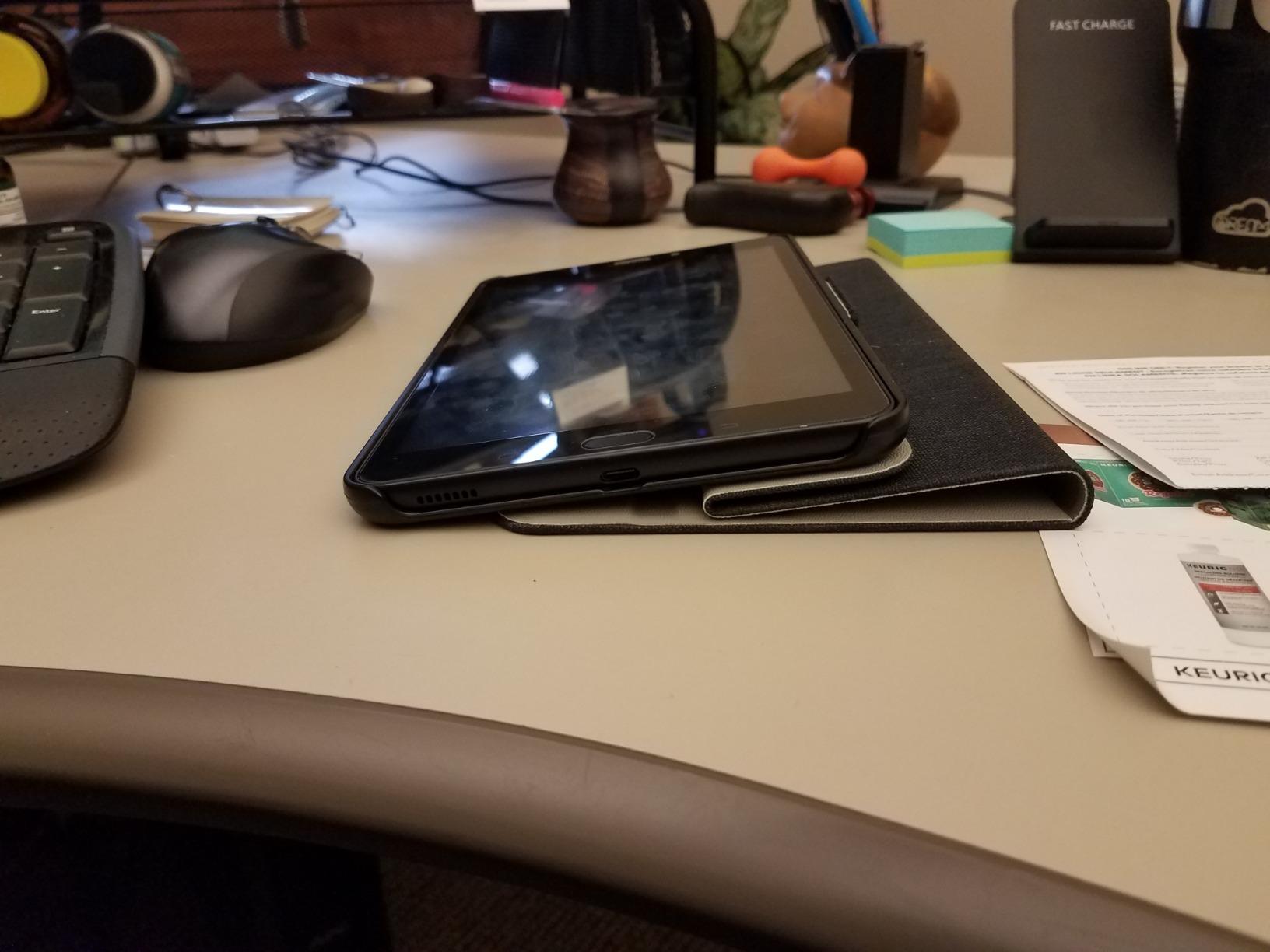 Is this helpful?
Carrie Hartwell
I bought my Samsung Galaxy Tab A from a vendor that didn't sell a tablet case that would fit. So I ventured online and found one by a different manufacturer that was a few dollars cheaper. I had it for less than 8 months and the inferior case was already breaking; cracks near the magnetic rods that caused them to fall out, the spine was too flimsy and difficult to hold on to. Because of the poor design, I opted to search for a replacement and came across this book cover.I've had this book cover for almost a week now and it is considerably better in design and quality. The spine goes all the way to both ends and has a sturdy closure on the side. The cover is made of a sturdy material and I'm able to balance it on my lap without difficulty while viewing in landscape view. The inner lining is made of a material that helps with gripping while I'm holding the tablet in portrait view. I like the texture of the outside material and like the color I chose (blue/black). The only issue I have is the space around the power and volume buttons. I find I have a hard time pressing the buttons due to the thick plastic edge of the tablet casing, but it is not so much of a nuisance that I can't adjust to over time. If you are in search of a tablet book cover case for your 8.4 inch Samsung Galaxy Tab A, this is a good one to have.
Is this helpful?
Daphnet
This case has worked very well for my Samsung TabA 8.0 2017. The tablet fits perfectly into the holder and stands up at almost any angle even when it's not sitting in one of the grooves, which is really nice. The only reason I didn't give it 5 stars is because, when I compare it to my old Thankscase I used for 4 years on my old tablet, there was a swivel function that would allow the tablet to stand up in both the horizontal and vertical postions. Other than missing that option, I am very happy with this case.
Is this helpful?
MSR
Got this to protect my Galaxy Tab A. The cutouts are precise; it has a magnetic clasp that minimizes power use when shut, and the matte finish doesn’t show fingerprints. Lots to like at a good price.
Is this helpful?
Npetra1
Fast shipping. Fits my galaxy tab a 8.0, T380 perfectly. Tablet turns on when you open case and stands at two positions securely. It also looks great. Has perfect cutouts for volume amd power buttons.
Is this helpful?
Zach
This appears, feels, and functions with quality. It's simple, but does exactly what I need: protects my tablet and holds it in viewing position. A winner!
Is this helpful?
lsh
Works well with my tablet. Has two positions to hold in place when viewing. Has a magnetic closure. Looks like it will last well with use. Great little protector for my tablet.
Is this helpful?
Donald Foltz
It's a decent case. Ergonomically designed. The Ash Black version is more of a canvas material than the PU. I meant to select the Slate Black but didn't get a chance to change it before it shipped and well I'm just too lazy to do a return. I'm just worried about staining and overall wear and tear. It seems pretty sturdy though so hopefully it will last for a good while. 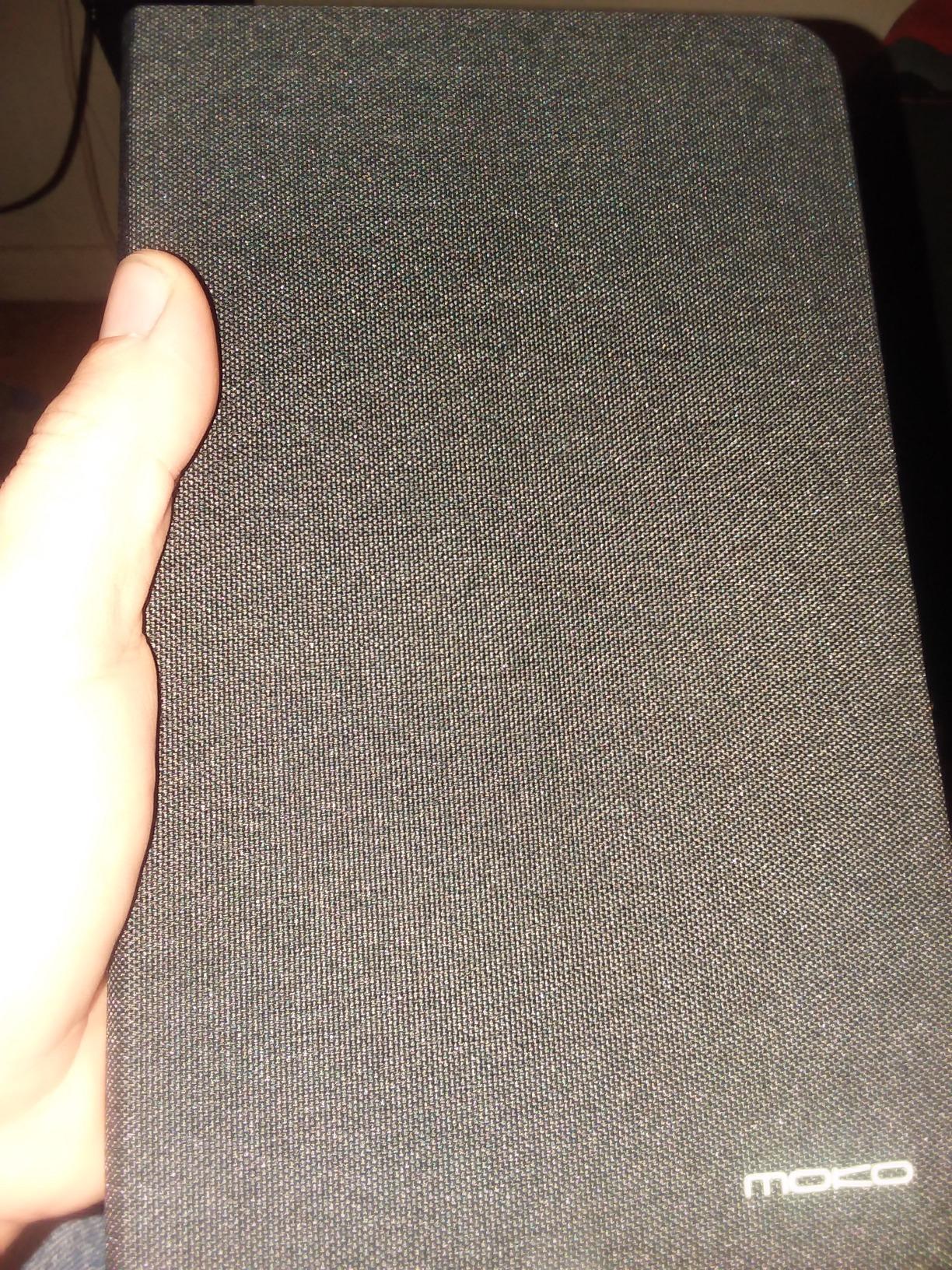 Is this helpful?
MS
The quality and fit of this case is really very nice - the only drawback is that there are only two positions for the stand, which does not include a position for typing. Nonethless, it's a really nice case that looks good and feels durable.
Is this helpful?
Gail
This is my third MOKO case. Two for a Nexus 7, of which one was a replacement covered by their lifetime warranty. The tablet fits perfectly. Construction is of good quality and it's not too bulky. Probably the only case I would ever purchase again.
Is this helpful?
THE GATOR
My wife actually hates this case. The grooves that are supposed to hold up the tablet are not deep enough to do so. The tablet falls constantly as she tries to watch videos on it. Was going to return it but with UPS return drop off shipping, we would have only received $4.00. Not worth the trouble and time.
Is this helpful?
TF
Exactly as pictured, very pleased with quality of materials.Short story:had an ipad with a really nice off brand cover, I paid 700$ for the stupid thing and barely used it, it sat in a locked moisture controlled SAFE and it still crapped out. 100% dead useless hunk of metal. So treated myself to a 'tab a' then got worried I wouldnt find a good cover.. searched through alllll of the cases on here knowing what I wanted. Even bought a 30$univerasal case with the same face material, I hated the non-fitting universal. This fits PERFECTLY. Exceeded my expectations
Is this helpful?
Not now...I'm reading
I was expecting a basic black tablet cover, however, I really liked the fabric feel of this case. It does not add bulk to the tablet. It looks very nice, and gives some protection. It is a good case for an adult. A child would need a much sturdier case.
Is this helpful?
mattman
This is for the Galaxy Tab A 8” 2017 which is the slimmer version than the 2015 tab A. It had a bit of a weird smell out of the package but it went away after a couple days. The multiple viewing angles and slim design are perfect.
Is this helpful?
Miriam Noble
This is a really nice case. The tablet snaps in so isn't bulky and has a magnet that keeps it closed. And the auto on/ off when you open or close it is pretty nifty. Very much recommend.
Is this helpful?
Amazon Customer
Good case. Very good quality, looks pretty durable. Nice textured cover. Note that this is not a "thin and light" cover for maximum thinness, though it isn't as thick as a Body Glove or some such case as that. This is a little more protective and thicker than a thin fit. But if you are ok with that, I do recommend it.
Is this helpful?
hakuryu12
This case was exactly what I was looking for. I'm not a fan of the cases that trifold into a stand and this one creates a sturdier (to me) plane for use.The actual casing fits snugly to the tablet (confirmed 2017 version) and doesn't have to be forced into the enclosure. It doesn't wiggle or shift, so it feels secure.My only caveat is that this is only a magnetic enclosure. The magnetic feels fairly strong but the cover can come "undone" with enough of a shake. I would have preferred a nice elastic band to hold the case closed but this is a personal preference and no fault of the case. 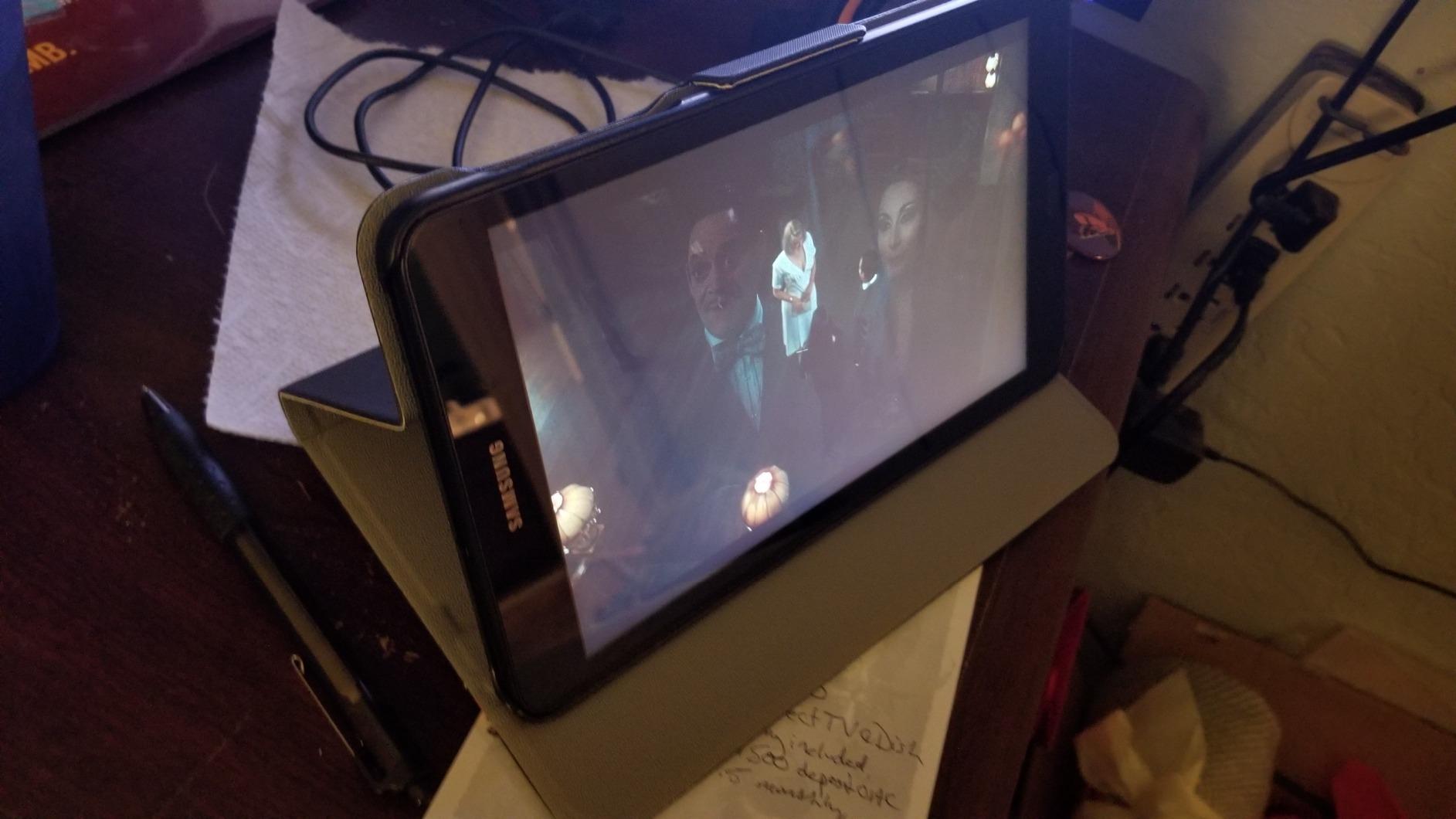 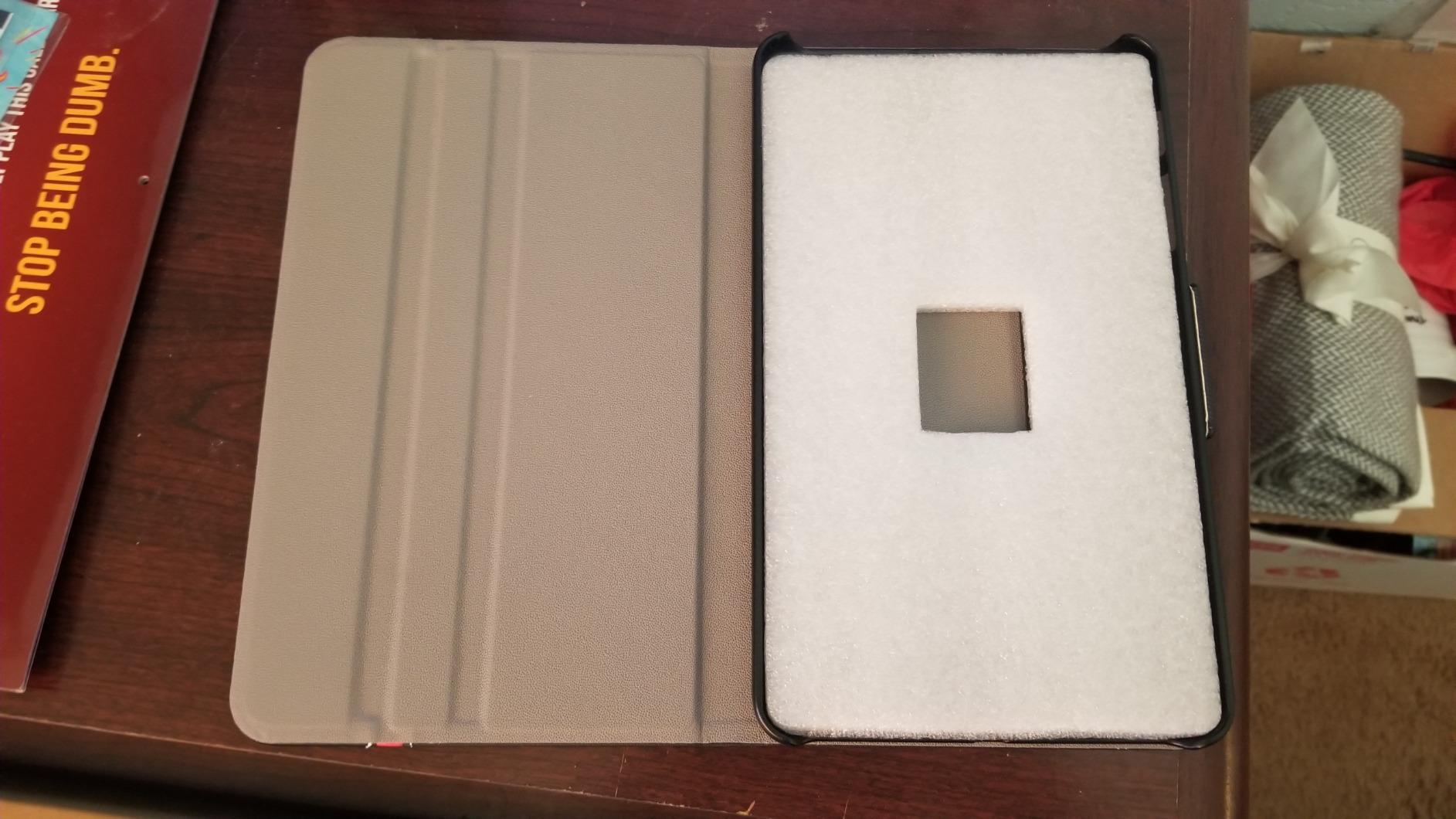 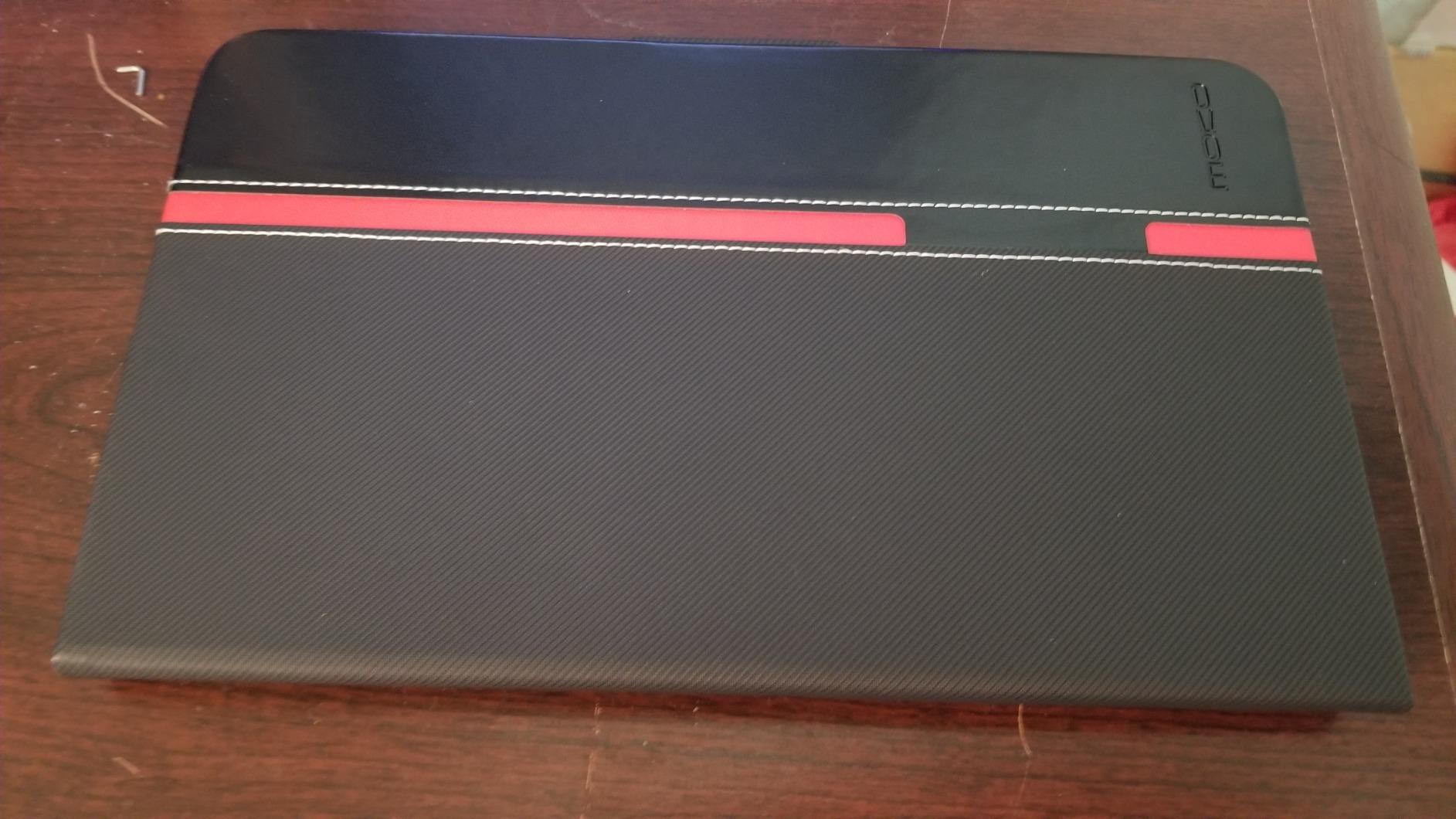 Is this helpful?
David W.
Pros:Fits T380Looks greatLocks screen when closed, unlocks when openedCons:Only 2 screen positionsScreen position grooves are shallowNo place to hold a stylusI love the look of this case, it kind of has a First Order feel (imo). When you close the cover, just before it is completely closed, the screen will go dark. Then, when you open the cover, you will be at the screen you were at when you closed it. That is assuming you don't have a password setup.As I said, there is no place to put a stylus. The grooves used to hold the screen up are quite shallow, so you should put it on a surface that will not be jostled too much.As far as the screen positions go, the 2 provided are enough for me. The reason I put them under cons is simply because more options are always better.
Is this helpful?