Details: When outdoor adventures or emergencies take you off the grid, you need a device that can meet your multiple needs. The Eton Scorpion II is a compact unit that you can easily store in a safety kit or toss in your rucksack and take with you anywhere you go. With its rugged exterior skin and aluminum carabineer, the Scorpion II is designed to endure any extreme outdoor conditions or emergency situation.

Thanks for your review! it will be published soon. Thank you! your review was submitted
Andrew
Just about everything but setting the clock is intuitive, except using the USB port to charge another device. Normally, you just plug it in and it works, but for this radio you have to plug in the cable (to radio and device to charge like a phone), turn on the radio with the power button, then hold M until your device shows it’s drawing power and charging.I was very confused why it didn’t work the first time I pulled it out of my bag to charge my phone. Thankfully, it wasn’t in an emergency. I had to look up the manual online. Thankfully, my phone wasn’t dead yet. It really should just be connect, and start charging like most USB power banks. Or connect and hit a button to start charging. Not connect, turn on, hold a button until the radio turns off and the device begins charging. Not great to have convoluted steps to remember in the stress of an emergency.Otherwise, though, this is a great, fully featured, and durable little emergency radio. I feel better right having it nearby. Except for the integrated bottle opener. That’s just dumb.
Is this helpful?
Seabassil
This radio is advertised as having an 800mah internal battery, but when mine arrived I opened it up and found a 400mah lithium-polymer battery inside instead. I'm not sure what chemistry the correct 800mah is supposed to be (li-po or ni-cad), but I have ordered a second one and will see what that comes with, then update this review.UPDATE: The second radio also had a Great Power brand 400mah li-po inside. I have contacted Eton customer service for an explanation.UPDATE #2: The Eton customer representative I worked with actually checked with the engineers for me, and came back that the internal battery is actually two 400mah cells wrapped together to form a single 800mah battery. After taking another look at the battery in mine, I could see there were indeed two cells inside the shrink wrap.As an owner of the original Scorpion, I decided to get the Scorpion 2 as an upgrade when the original's 350mah Ni-Cad battery stopped being able to hold a charge. Past Eton hand crank radios were manufactured with the same batteries used in old cordless phones and had the same problems - left on the charger most of the time, the batteries just die after a year or two; left off the charger and the batteries slowly drain and are dead when you finally need them.Compared to the original, the Scorpion 2 winds up being more of a 'sidegrade' rather than an upgrade.The pros: The 800mah internal battery is more than twice as much capacity as the 350mah that was used in the original. The solar panel looks to be improved and, I assume, more efficient, but a bigger battery requires more time in the sun for a full charge. The flashlight is brighter by a significant margin and appears to use a LED chip, where the original had a trio of LED bulbs. This new light has a square-shaped hotspot in the middle of the beam which some people may like and others will not. I've compared this to the soft halo of the original in the included pictures. The biggest improvement is the inclusion of a micro-USB charging port, allowing the radio to conveniently be charged without direct sunlight or lots of hand cranking. The original could be charged using a separate AC adapter and a specific plug - the micro-USB is common and virtually everyone already has at least one of these cables.The included 800mah battery is also lithium-polymer - this is a great upgrade from the old nickel-cadmium batteries Eton has used in the past. Li-pos hold a charge better, longer, and don't suffer from memory effect over time.The cons: Compared to the original Scorpion, the speaker for the radio is considerably quieter. At mid-volume (set at 15 on the controls) the Scorpion 2 is about half as loud as the Scorpion 1. At full volume (set to 30) they seem to get closer to the same level but the Scorpion 2 is still noticably softer. Additionally, they've removed the AUX input which allowed the original to be used as an exernal speaker for other music players or phones. Although the two versions have an identical outer shell, the construction quality seems sloppier on the Scorpion 2. I believe the original was sold for $60-$80 so it appears that Eton has cut some corners to bring down the price on the Scorpion 2.Durability is probably on par with the original, since it feels like the same material and roughly the same weight. The carabiner loop and bottle opener have remained unchanged and the controls and LCD screen on top are pretty much the same as well.Overall, the micro-USB charging port definitely brings some much needed versatility to the Scorpion, but beyond that any improvements have come at the cost of something else. In the end, this radio was on sale and was basically the same price as replacing the battery on my old Scorpion, so in that respect it does the job. In an ideal world I'd simply be able to add a micro-USB port to my old Scorpion and put the bigger battery inside. 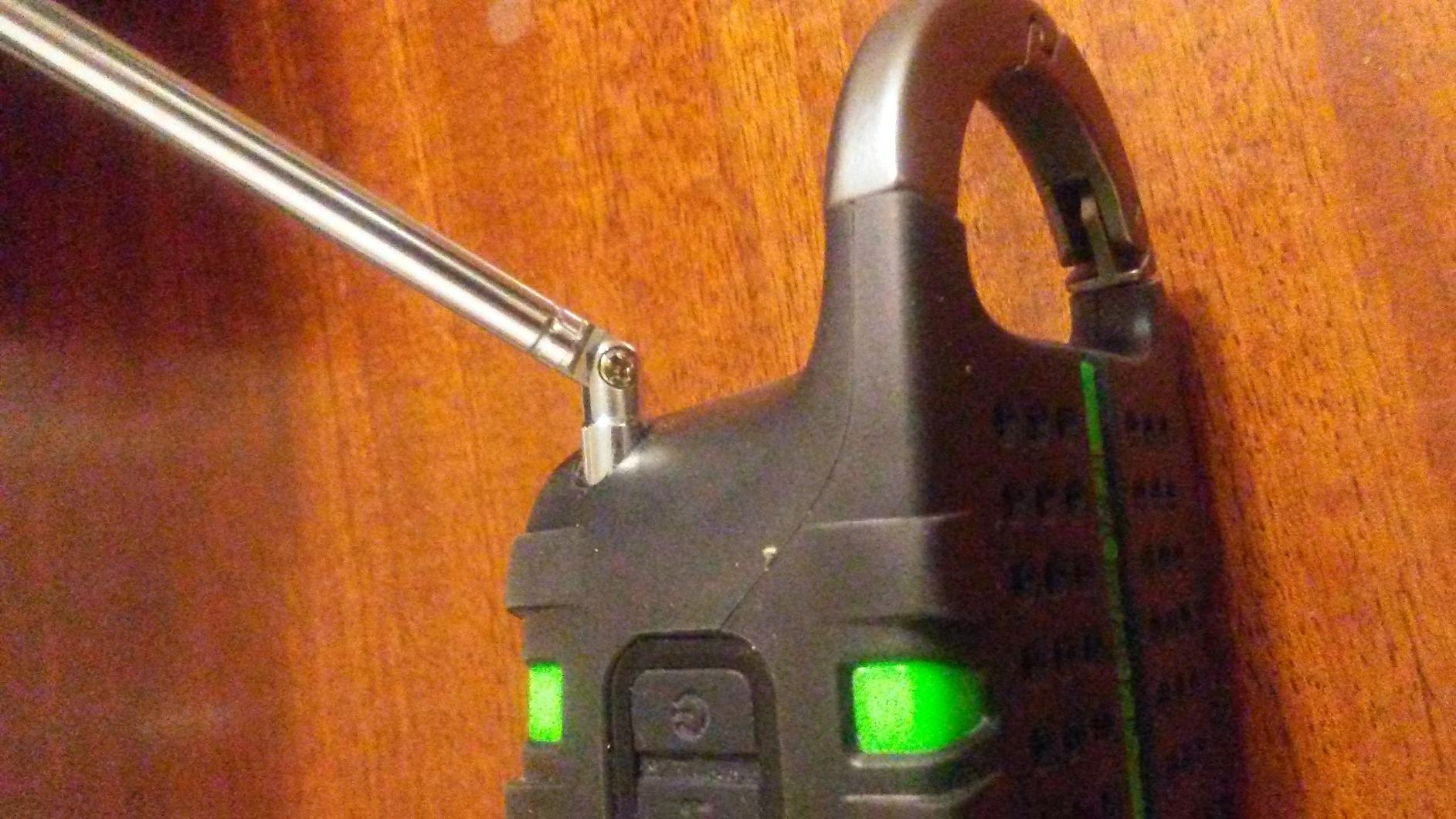 Is this helpful?
DrJWC
It was heavier than I expected. But, but, it is smaller than I expected too, and there is an AM/FM/NOAA radio stations, flashlight, hand crank, snap hook, and bottle opener. Plus it can recharge your cell phone by either the crank, solar, or plugging it in to the wall. It actually gets very good reception on both AM/FM and the volume was pretty loud. I could get reception on a FM station from a city 45 miles away. The NOAA weather station gets a lot of static, but you can still hear it pretty clear. I am charging a Li 3500Mah 18650 Fenix flashlight battery right now with no problem just to see how much it will recharge it when the radio is fully charged. It says in the instructions that it cannot get wet or rained on.......interesting. I would definitely buy this again because my cat already knocked if off the table twice, and it still works despite falling 3 feet onto a tile floor. Fortunately nothing broke, so I know it will take a descent fall. It is an amazing and rugged little radio that is very easy to work!
Is this helpful?
Avion
Use it as a portable power supply, flashlight and radio. Yes, its a little big, but it is all in one. I keep it in by backpack for everyday use, and take it to college football games to listen to the play by play. NOAA radio is nice. Charges my iPhone and iPad mini acceptably while on the road. LED flashlight works well and uses little power. 1 hour of intermittent cranking charges the battery to 2/3. Battery recharges via USB in around 1 hour. I believe the solar cell is practically useless, but have not tested it thoroughly.
Is this helpful?
Loves To Read
Update: I wanted to love this product. Unfortunately, quality control is an issue. After very little use, the top portion of the antenna pulls out and separates from the rest of the antenna. The crank does not lock into place and just flaps around.Pro's:Nice bright beam.Sturdy construction (not so after use)Carabiner is good quality and attaches well.Holds a charge well.Sounds is decent enough to understand Weather Band.Cons:Heavy (downside of being sturdy)Radio sound quality is poor for AM/FMOn/Off button feels squishy when pressed.I wouldn't recommend it as it is likely to fall apart with use.
Is this helpful?