The solid black back cover gives your iPad a sleek, minimalistic look, while protecting your device against fingerprints and scratches.

Made of durable polyurethane exterior, soft microfiber lining and hard back cover, the case provides total front-and-back protection against fingerprints and scratches.

Thanks for your review! it will be published soon. Thank you! your review was submitted
JoanneR
I bought this case with my very first iPad. I was so excited to get the iPad (in rose gold) and have a case that matched. I did a lot of comparison shopping and this seemed like the best case for me. I use my iPad for less than an hour a day, and I’ve never dropped it or anything. One day, 3 weeks after I got the case and the iPad, I took a screenshot using the home button + the on/off button at the top of the iPad, and the top right plastic corner of the case crumbled in my hand! After that, every time I went to shut down the iPad, or just switched positions in my hand, that broken plastic corner kept cutting my finger. Trashed the case and bought a different one. This one, also, was difficult to hold in a horizontal position with one hand. I wouldn’t recommend this case.
Is this helpful?
Folsom Mom
Cute for sure, but it started to crack within the first couple weeks of use. 3 months later it unusable. And this isn’t used by anyone else but me (mom), and I have been very careful with it.Now I am looking for another case. Perhaps I will buy another and see if perhaps I just got a bad one. But I will probably go for another brand this time.
Is this helpful?
Mike
I bought this cover 9 months ago for $13.99. I use my iPad about 4 hours daily for FaceTime calls, Internet search, TV series watching, etc.Previously I had an original cover from Apple, but after 4 years of using it began to tear off near the magnet. Also, I bought a new iPad and decided to buy a new cover. At the Apple store that day they had only black covers so I went to Amazon and found this pretty cheap cover.The top of this cover is smoother than the cover of an original Apple. The cover of Apple seems to be more rubberized and not so slipping. The angle of slope of this cover is sharper and therefore the tablet is more horizontal. It is tilted slightly closer to the horizontal surface. But this is not a significant issue.The back cover is plastic and there is plastic around the perimeter. The plastic cover is slippery. Be careful leaving the tablet on the marble countertop.Overall I love this cover! 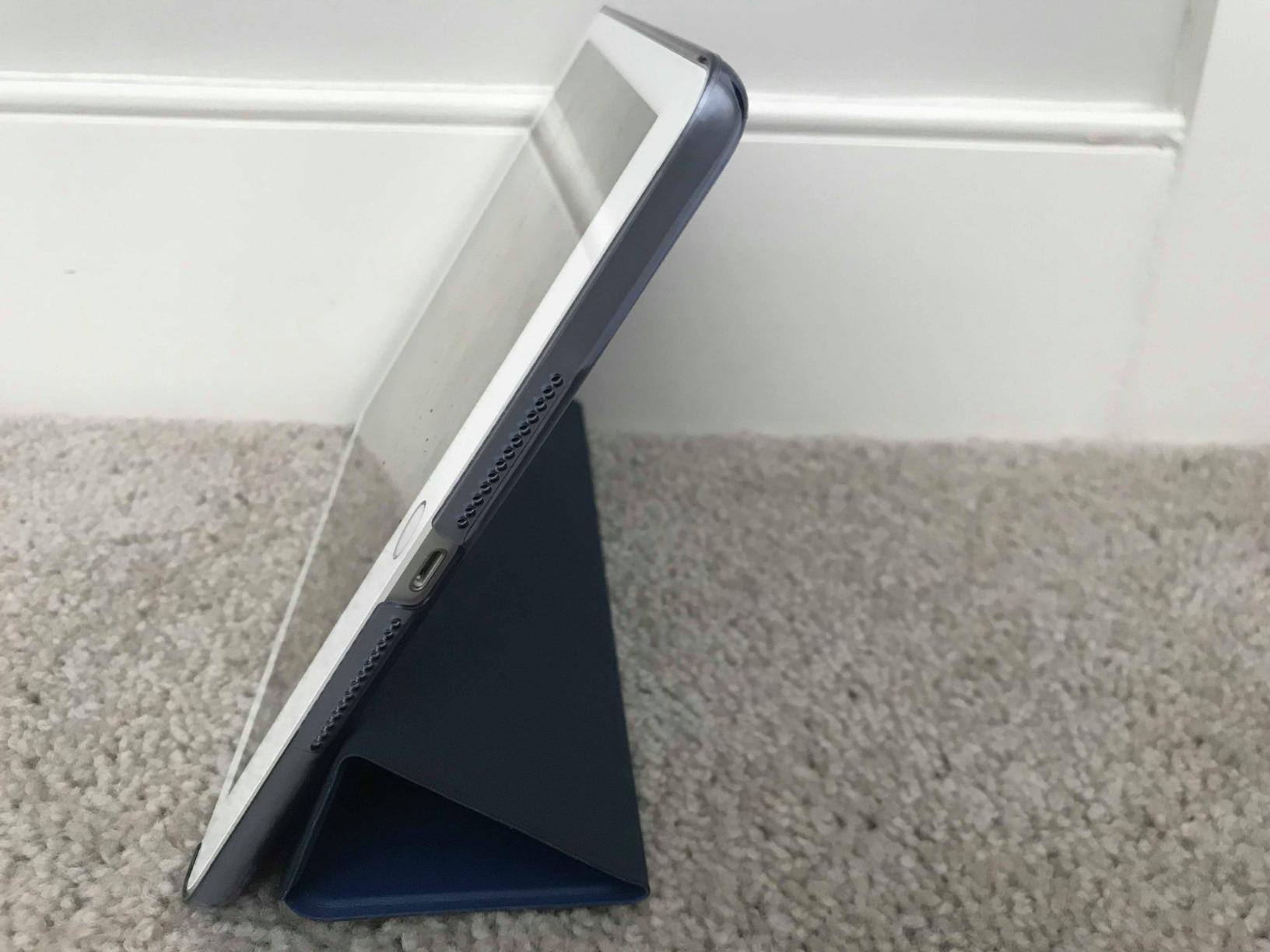 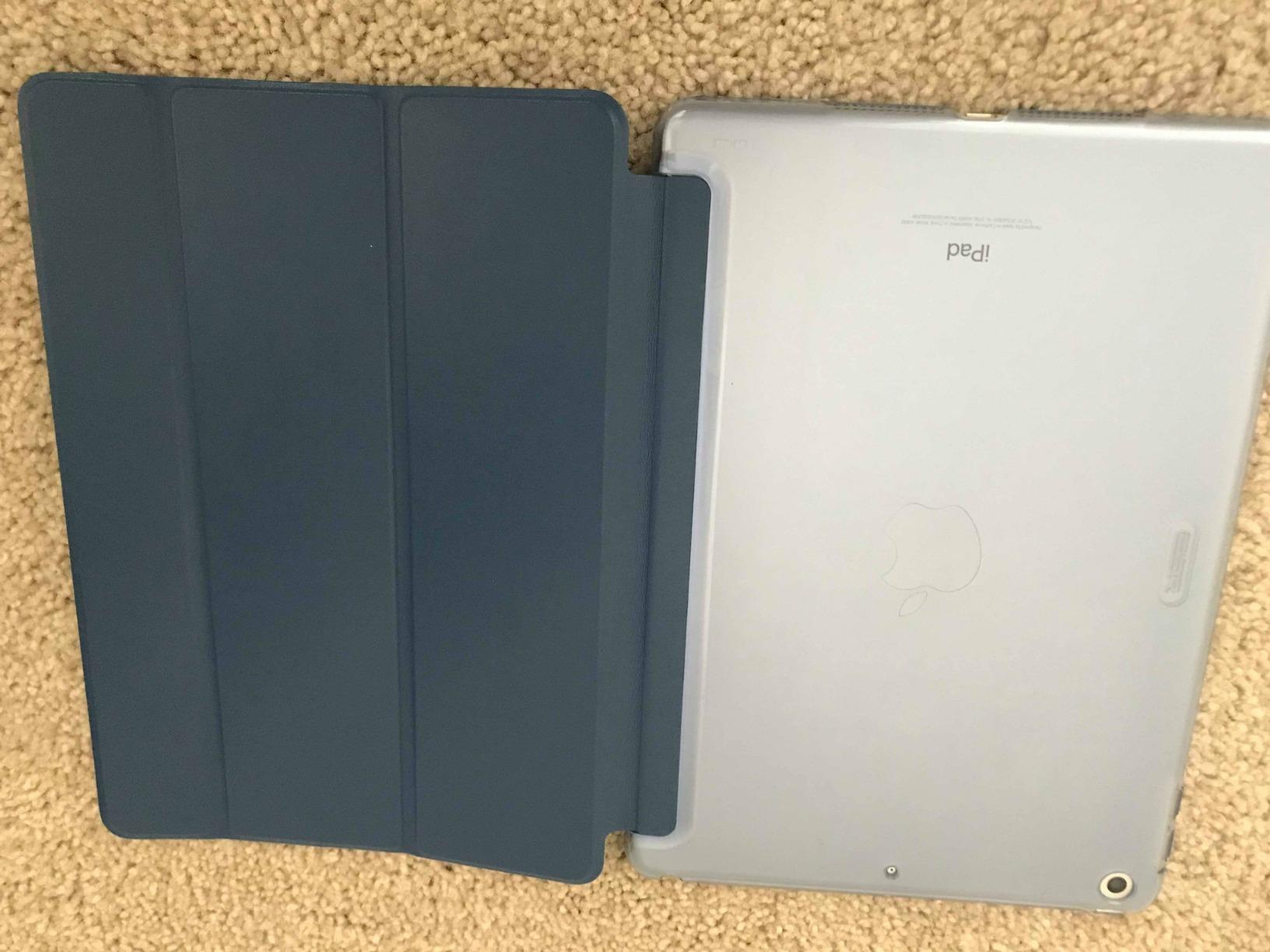 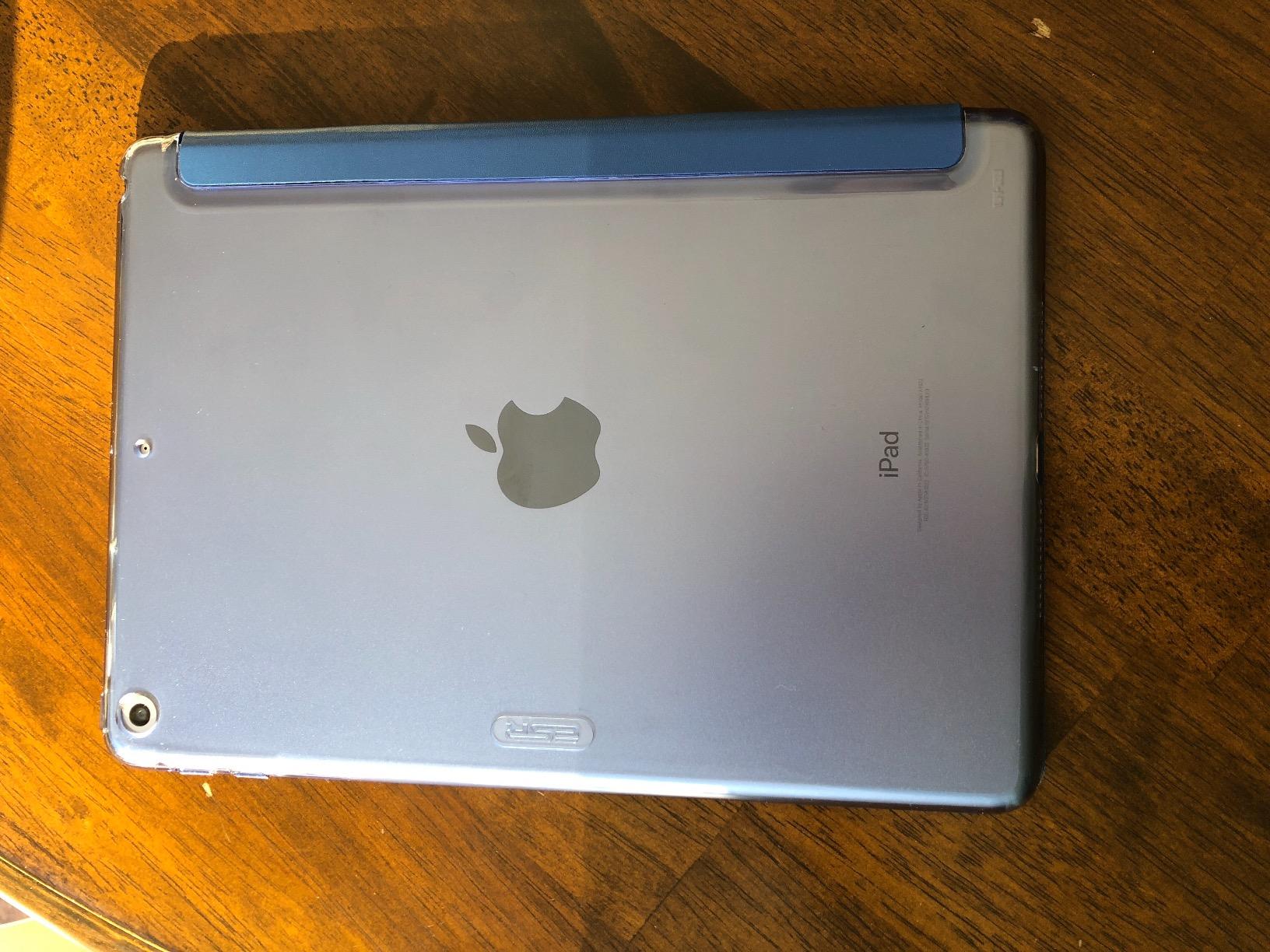 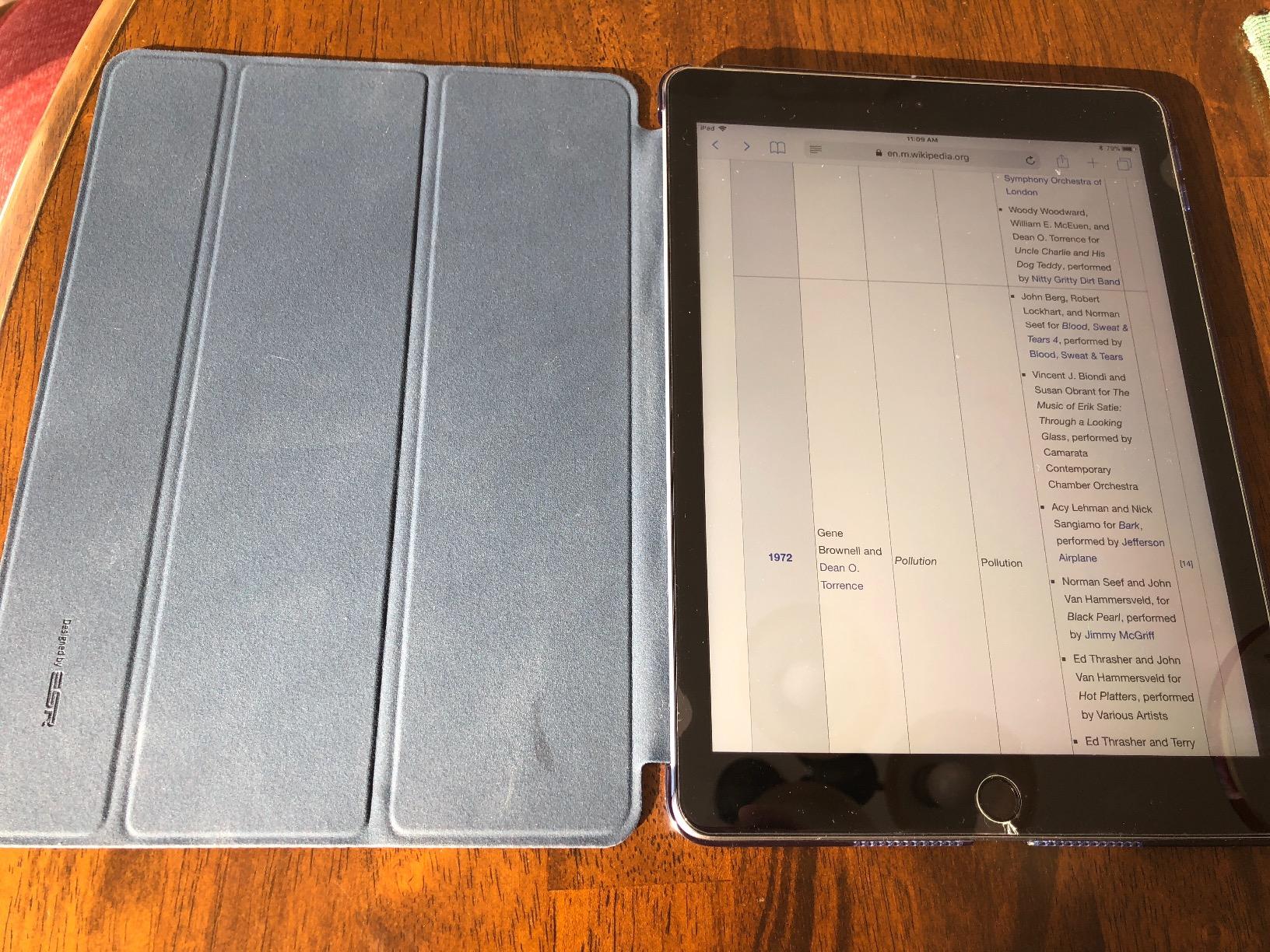 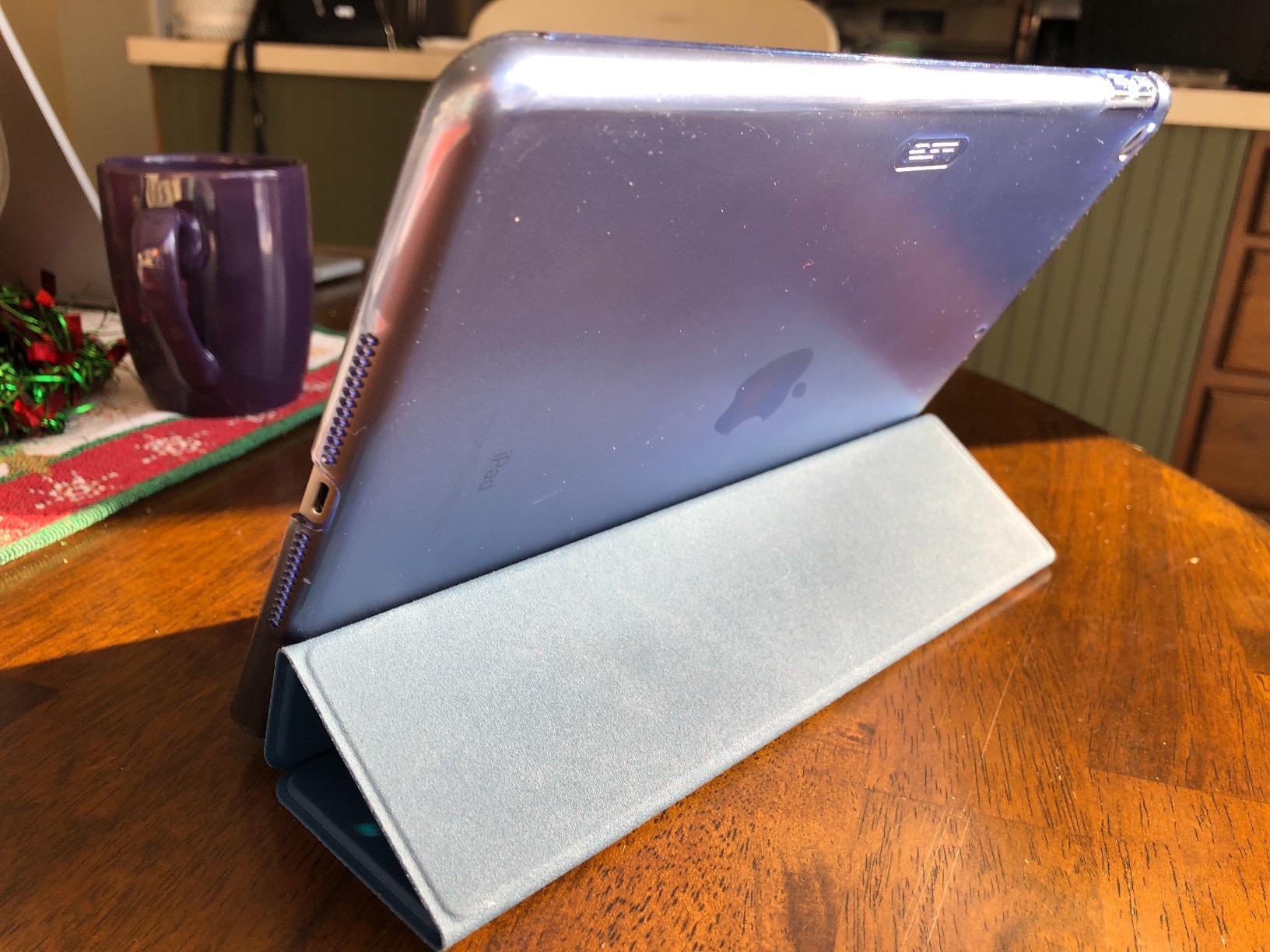 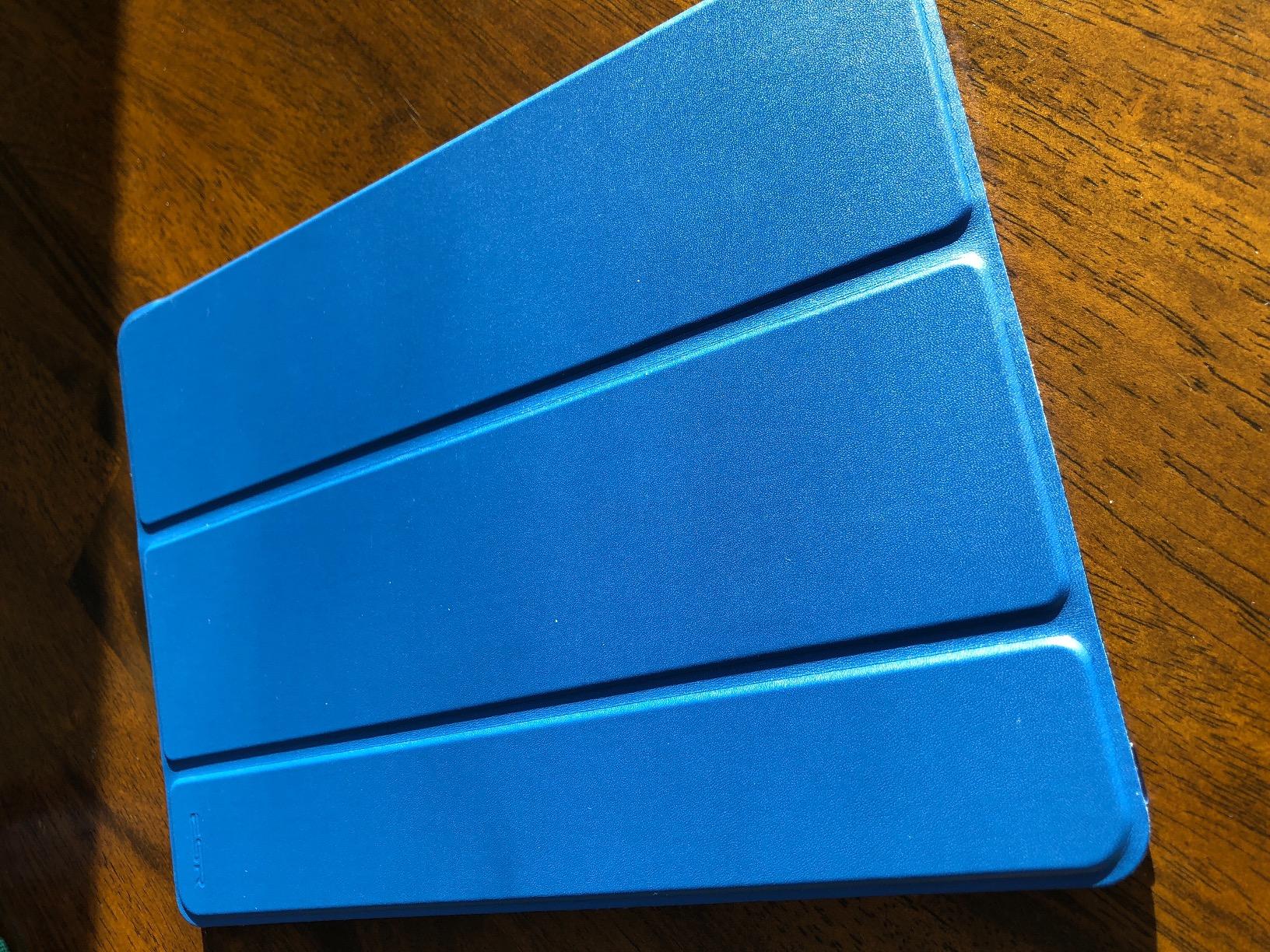 Is this helpful?
Rachel Edington
This was my fourth case I bought for this iPad in 2 weeks! This one finally fits and works perfectly! I wanted to go with a fun design, but the iPad either moved around too much or didn’t fit. Not a problem with this case. Save yourself the hassle and just get this one. Comes in several lovely colors. I got the gold which is really pretty, and not too overpowering. It matches the iPad, so I am happy. The quality is excellent. It is super thin too, so it doesn’t add much weight to the iPad. Package came within 2 days and was in perfect condition. I highly recommend this brand.
Is this helpful?
StarLily
**update: After writing this review, the seller contacted me and reminded me of their 100% satisfaction guarantee. They were courteous and kind. I am keeping the item and using it since it is a nice item. The only down-side is having to flip the iPad to use the standing option. I am giving a 4 star rating instead of 5 due to flipping option.I love the magnetic "off" feature when lowering the cover!!! Looks nice too. The one major thing for me that didn't earn a higher rating is the feature that allows me to prop it up in an almost standing angle. you have to flip the iPad over 180* and some apps don't work in that position. I cannot switch the case around due to the holes being placed in the hard case to match the iPad. Unfortunately, that is one of the top things I was looking for. Otherwise, I like it and it protects both front and back of the iPad.
Is this helpful?
Greg Morken
After reading many negative reviews on this ipad case, I wasn't sure what to expect when this case arrived. For those reviewers who stated the cover's cut outs didn't line up with the camera, volume buttons, etc on the new 2017 Ipad - I'm not convinced they were actually putting the correct iPad model into this cover. All cut-outs were perfectly aligned with my iPad 2017 model.As for reviewers mentioning it being made out of plastic, iPad auto on/off not working using the magnets embedded in the cover and not laying flat on the screen. That is only partially true. It's indeed made out of hard plastic - but what do you expect for the very low price? Its a cheap alternative to a higher quality $50+ cover. It may not survive a 3' fall, but for those who are careful with their electronics, it does provide a level of protection better than nothing. It does turn off my iPad when I close the cover over the iPad's screen and it does indeed lay flat on the screen when closed.When unfolded, the horizontal and vertical stand works fine to provide a stable platform on a table or desk for watching movies or sending emails, etc...For as little as I spent on this case, I was quite satisfied with the quality that it provides.
Is this helpful?
Big Game James
After being somewhat disappointed with my official $39 Apple Pad Smart Case, I didn't know what I'd get with this $11.99 ESR iPad Smart Case. But the price was right and the reviews pretty good. So I took a chance. The main thing that appealed to me was that the ESR case provides both front and back protection for my 2017 iPad, whereas the Apple version does not.I received the ESR promptly after ordering, in perfect condition and well packaged. The iPad snapped into the case perfectly and all the buttons worked fine. I was prepared for the "smart" function not to work properly but it worked fine, turning the iPad on and off when the cover was opened and closed. I later added an Anker tempered glass screen protector to the iPad and wondered if the smart function would still work since the screen protector is kind of thick. No worries, the case still closed securely with the smart function intact.The only negative feature I've encountered is that the case is very slick and slippery. Which makes it slightly harder to hold and pick up off a flat surface. Aside from that, the ESR iPad case is a well-designed top-notch product at a superior price that does exactly what it's supposed to do.Note: The attached photos show the ESR case next to the Apple case and by itself with the iPad installed. Cheers. 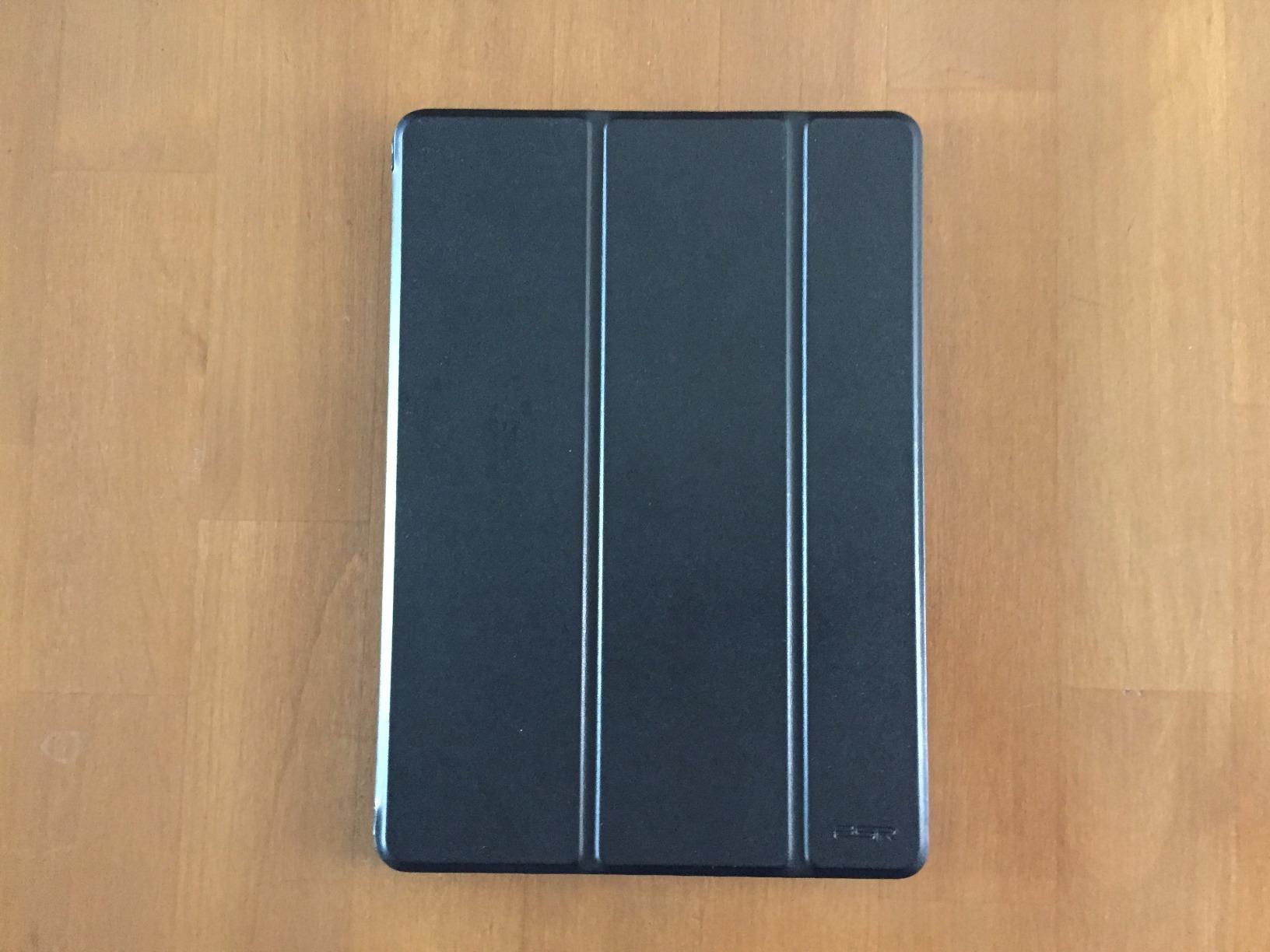 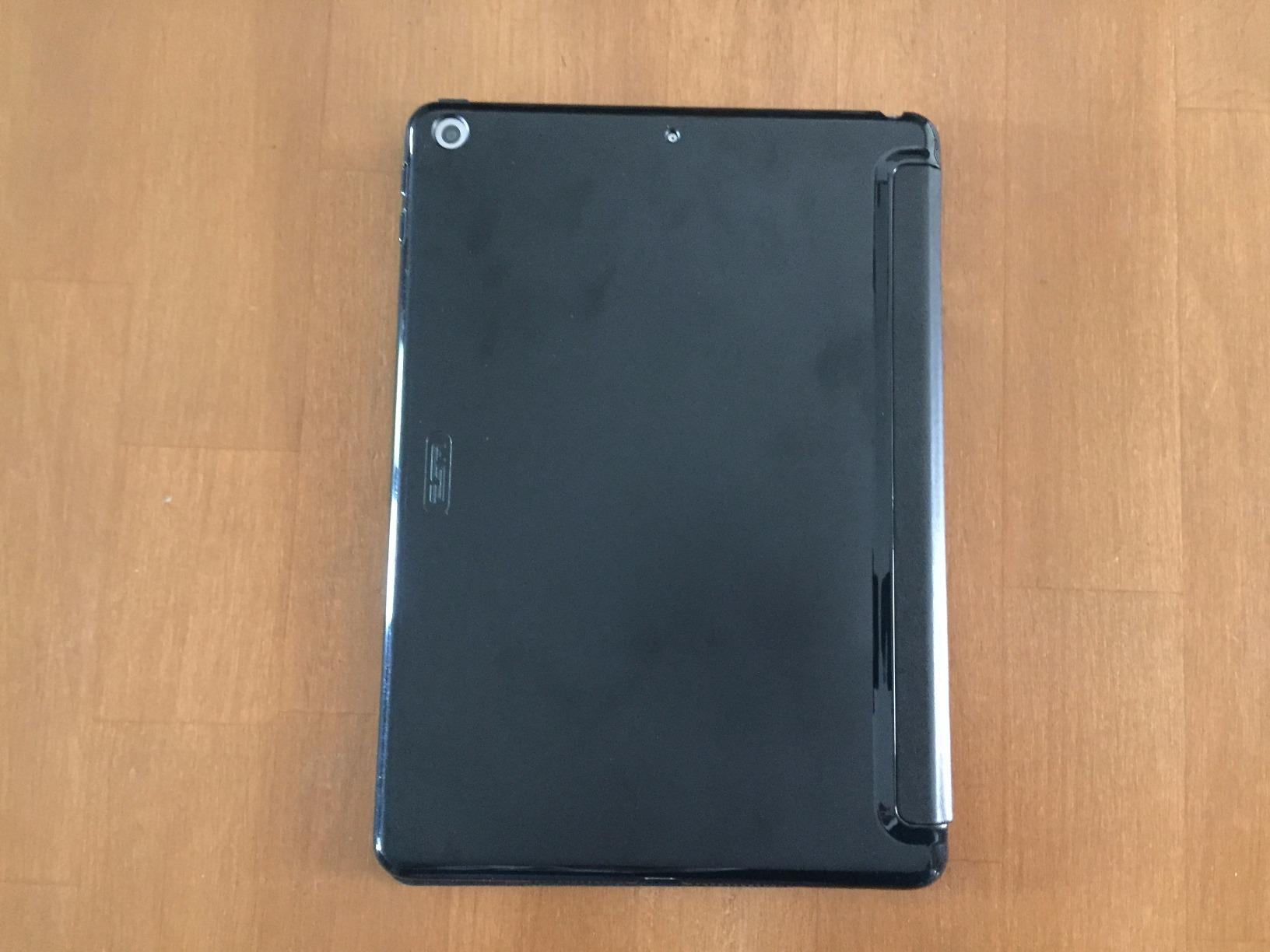 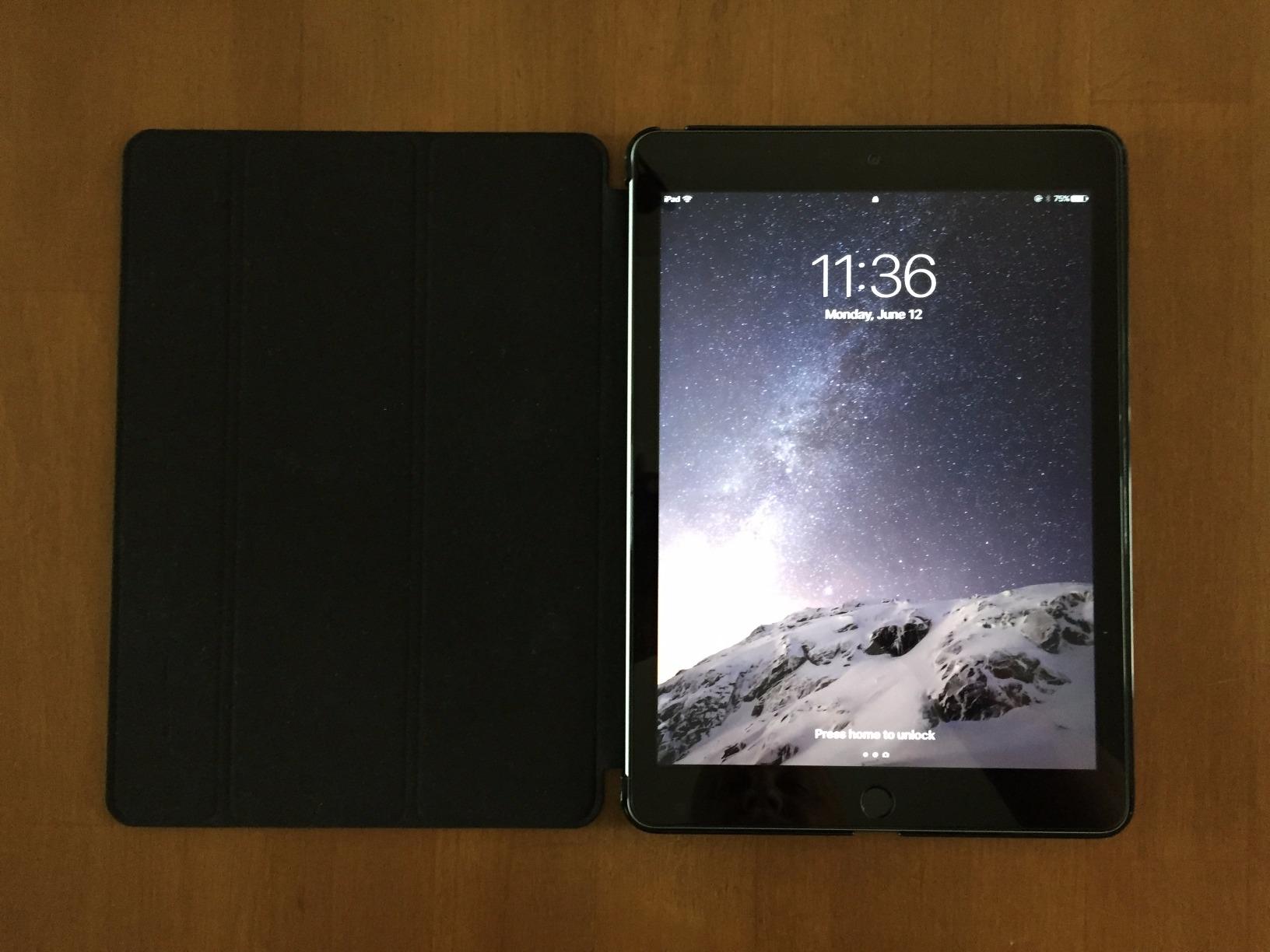 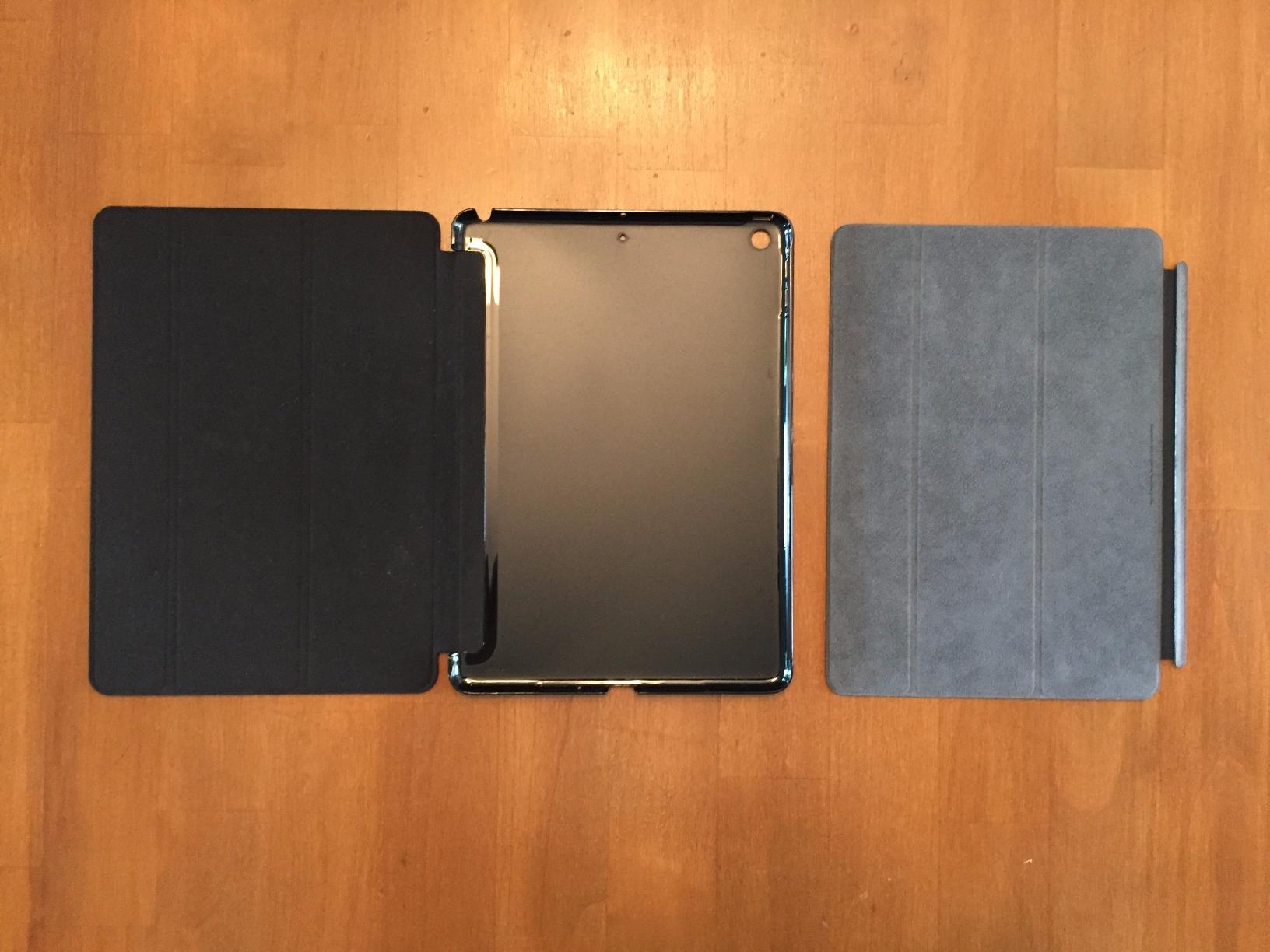 Is this helpful?
DJ in NM
This fits the new iPad 2017 9.7 perfectly (unlike one I had previously ordered that was *supposed* to fit). My only criticism is that it isn't quite as easy as I would like to have it propped up while in the more horizontal position (as opposed to the more vertical position, which works fine). But it could be "operator error," so I'll keep working with it.
Is this helpful?
Lynn B.
I just purchased the New iPad 2017, (April 2017) and much to my chagrin, the only case Apple currently has for it is the magnetic cover. I verified this both in the Apple store and in an on-line Apple Chat. I had the magnetic cover on my old iPad, and it did nothing to protect the device. It is very difficult to navigate through the "zillions" of iPad cases for sale by third parties. . I want to thank the customers who purchased this case and reviewed it - specifying stating that they, too, purchased the New iPad 2017. I would never have found this case without your reviews. I received the case today, and I could not be more thrilled!! The iPad fits into this case EXACTLY -with all the functions perfectly accessible. My old iPad slid off the couch on to the carpet, and the frame bent. I think this case would prevent damage from this type of accident. My thanks to Electronic Silk Road Corp. for having this case ready for consumers. I am very thankful to have found it. One more thing... the price is too good to be true- except that it IS true!!!
Is this helpful?