Details: The 12.9-inch iPad Pro features an advanced Liquid Retina display that goes edge to edge. Face ID, so you can securely unlock iPad Pro, log in to apps, and pay with just a glance. The A12X Bionic chip is faster than most PC laptops and easily runs pro apps. All-day battery life. Wi-Fi and Gigabit-class LTE. Over a million apps available on the App Store, including augmented reality experiences. And Apple Pencil and the Smart Keyboard Folio help you be even more creative and productive. It will make you rethink what iPad is capable of—and what a computer is capable of. 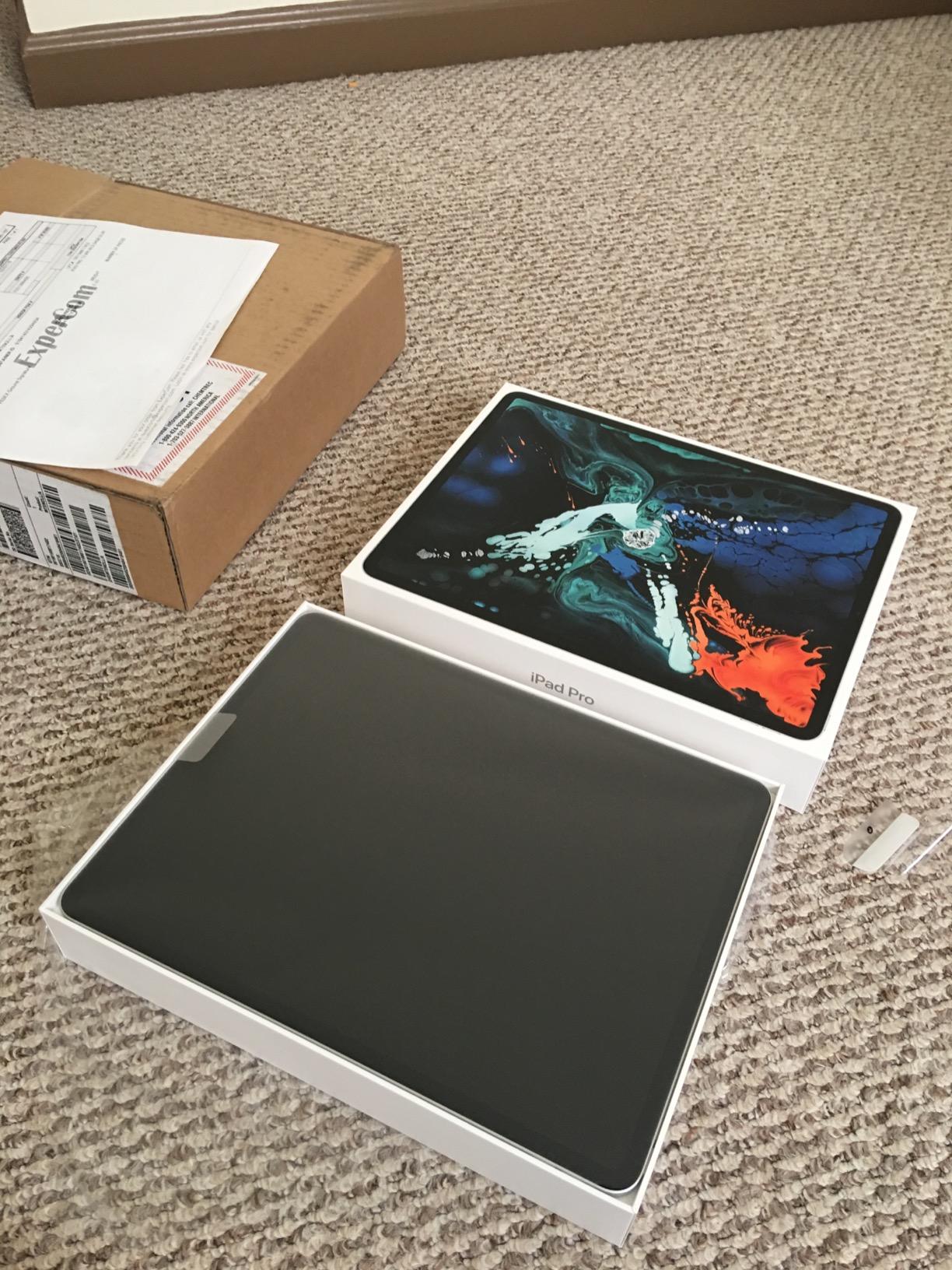 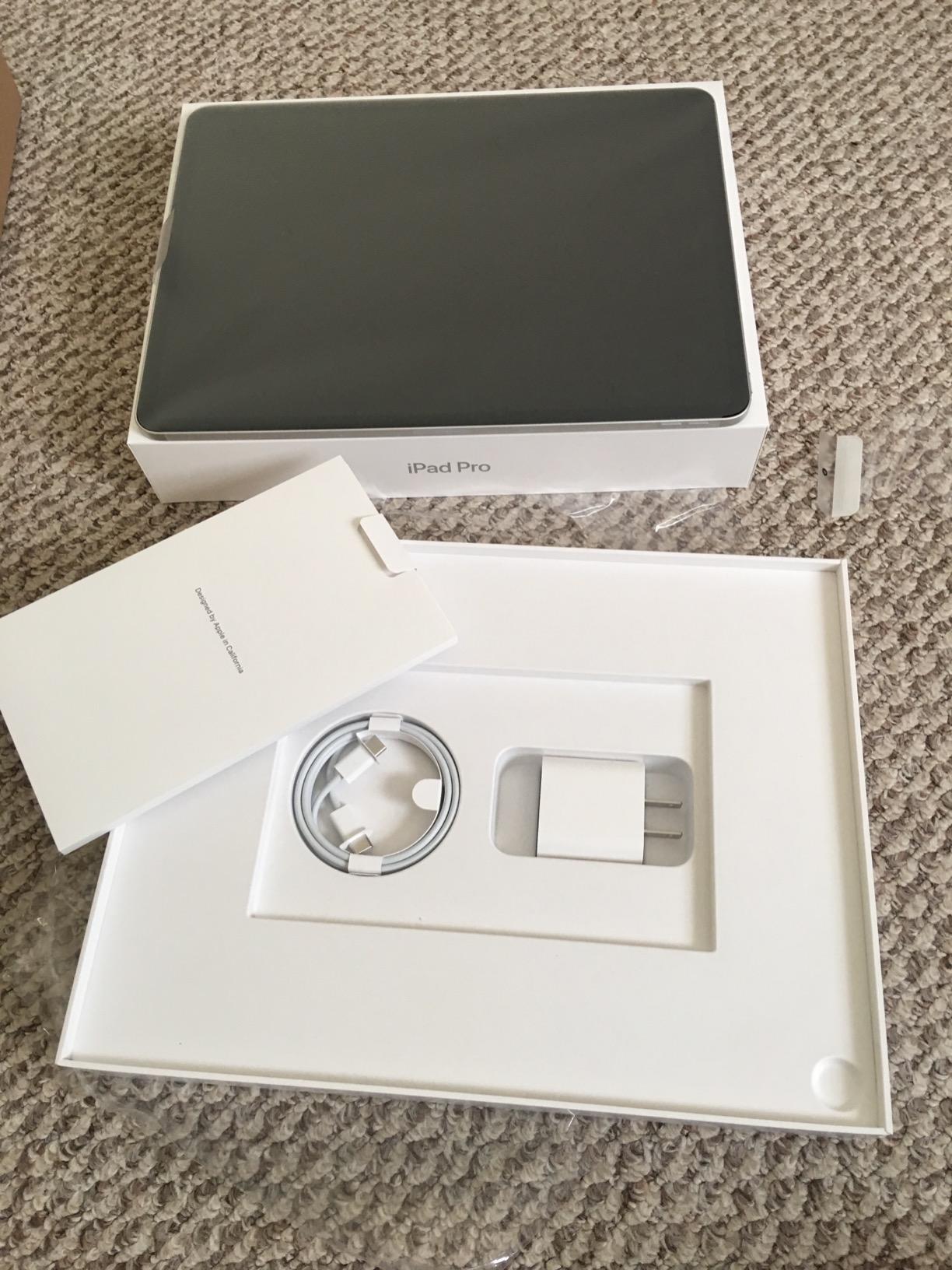 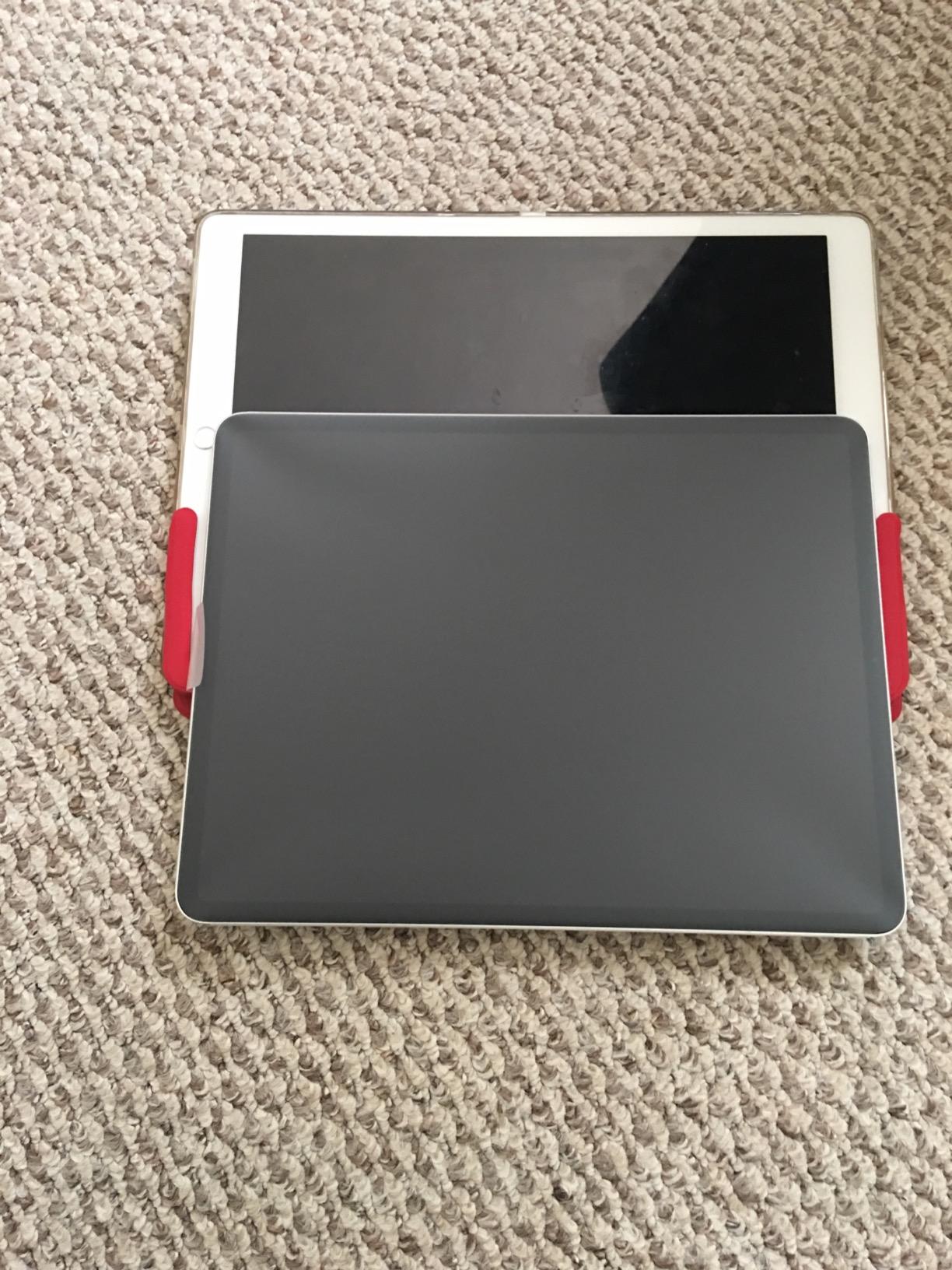 Is this helpful?
Roderic Rinehart
Upgraded from the iPad Air from at least 3 years ago, and it was a great iPad. I have had an iPad since the day the original one released and to see how far it has come with the 12.9" Pro is astonishing. It is one of the best screens ever. And the Pencil 2 works like a dream.I primarily use it for split-screen with the Kindle app and Notability. You can also see two Bible verse translations side-by-side on the super popular YouVersion Bible app. I love to have the NIV and the NRSV side by side, scrolling along with each other, able to highlight in both.Using the pencil to highlight on the Kindle is amazing, and having more than 1 color is a nice feature. I love having all my highlights for every book I read and all my notes in Notability. The handswriting features in Notability are stellar.My daughter uses it for Procreate and it is awesome what she can do. It seems professional quality and is quite fun to use also.Can't go wrong and they won't update the Pro until at least November 2019, but maybe even later than that, as they are not all on yearly update cycles like the phone.
Is this helpful?
IRENE RYDING
Apple is so cheap...you now have to buy an adapter for headphone because the only input is the USB-C jack. They don’t tell you this when you buy it. You have to learn the hard way that there is no headphone jack. And, you cannot charge while using headphones because the charging input is being used for headphones. They also do not tell you that the screen size is diagonal, so a 12.9” screen is really under 11”. They are becoming too greedy and this will probably be my last Apple product ever because of shady advertising practices and undisclosed buy-ups that you need to function.
Is this helpful?
Thomas Sliwinski
I disliked the keyboard very hard for me to type and it kept dropping my wi-fi, so I returned it and am going to try an 11” this time
Is this helpful?
L. Shaner
My iPad Pro 12.9” (3rd Gen) is useless to give a presentation, because of Apple's removal of the headphone jack. :-(Most state-of-the-art, large-scale conference venues use HDMI, but with all of the audio being handled via a plain old analog headphone jack.Apple's own USB-C adapters for HDMI and VGA do not include a headphone jack, making the iPad Pro a no-go for professional presentations. :-(Numerous 3rd-party USB-C A/V adapters have headphone jacks, most of which do not extract the audio from HDMI and are therefore useless.Of seven that I tried, only one properly extracted / separated the audio and sent it out the headphone jack at all times.To make matters worse, Apple enforces HDCP even on my own presentations, so I was at the mercy of the A/V techs (very pro) to employ a sketchy hardware device, a la, HDCP "spoofer" to make the HDMI work with their projection / repeaters at a world-class conference venue. :-(I love everything about the portability and versatility and performance of the new iPad Pro, but this one issue is an utter catastrophe and a complete deal-breaker re: the viability of the iPad "Pro" in the REAL professional workplace.TO APPLE: Please add a headphone jack on your A/V adapters and turn off HDCP for non-protected content.
Is this helpful?
Brian V.
This is by far the best iPad on the market. The screen is beautiful and it is better than my surface pro 4 for the pen interface. I love procreate and I have enjoyed using it for the last month now. The battery can drain if you are running a high graphics game. (Example: I was playing civilization and the battery lasted about 5 hours, it has to process a lot of information when you are on turn 400 and it accounts for every unit and every city, probably around 200 actions to process each turn.)I love the tablet it’s ease of use is the main reason for my getting it, compared to any computer, this is quicker and more conventient. When I only have a couple minutes to do something the iPad is the only solution when compared to other computers and tablets.
Is this helpful?
Ali
I’m 100% positive I recieved a defective IPad because the bottom of the screen wont respond to anything and I’m pissed because Amazon is not letting me return the purchase.
Is this helpful?
Alonso
I absolutely love this iPad. I have always been a computer person, but since I got this product my workflow has changed for the better. I use this iPad every day to write notes, read books, watch movies, etc. I have even used it to give a lecture on campus. The screen display is gorgeous and I prefer watching movies and TV series here than in my computer screen. Owning this iPad and using it to take notes has convinced me on going paperless, since writing with a new Apple Pencil feels great, even better than writing with pencil and paper in my opinion. This is the first Apple product that I own and I was pleasantly surprised by the quality of the apps that are available. The battery life for this device is really good, lasting over a day of frequent use. The performance is excellent, it has never frozen, lagged, restarted, or glitched in over a month of daily use. I recommend this product if you are looking for something reliable to take notes digitally and consume media like books and videos on the go.
Is this helpful?
alex
New but wrapper open by brand new in box 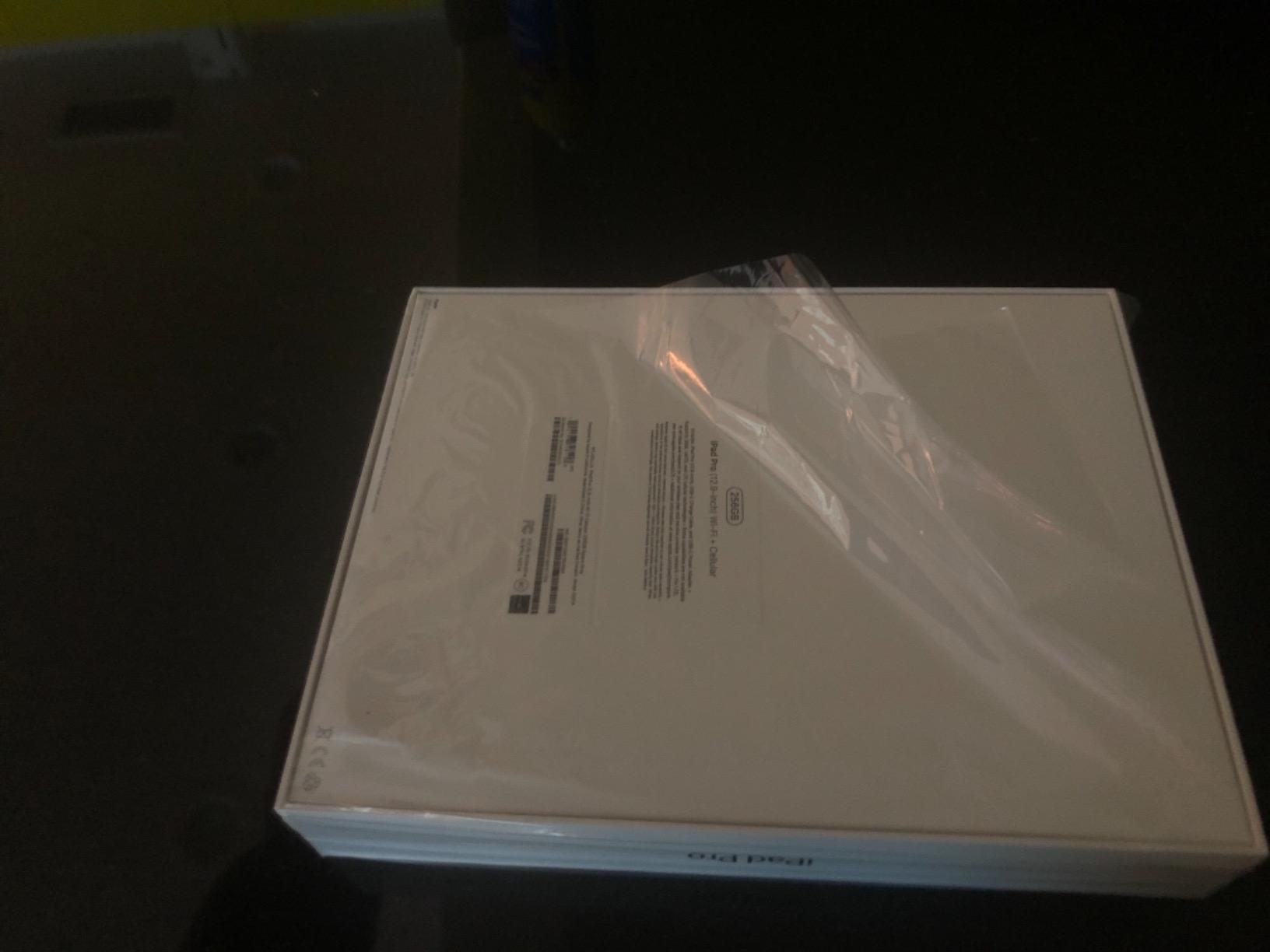 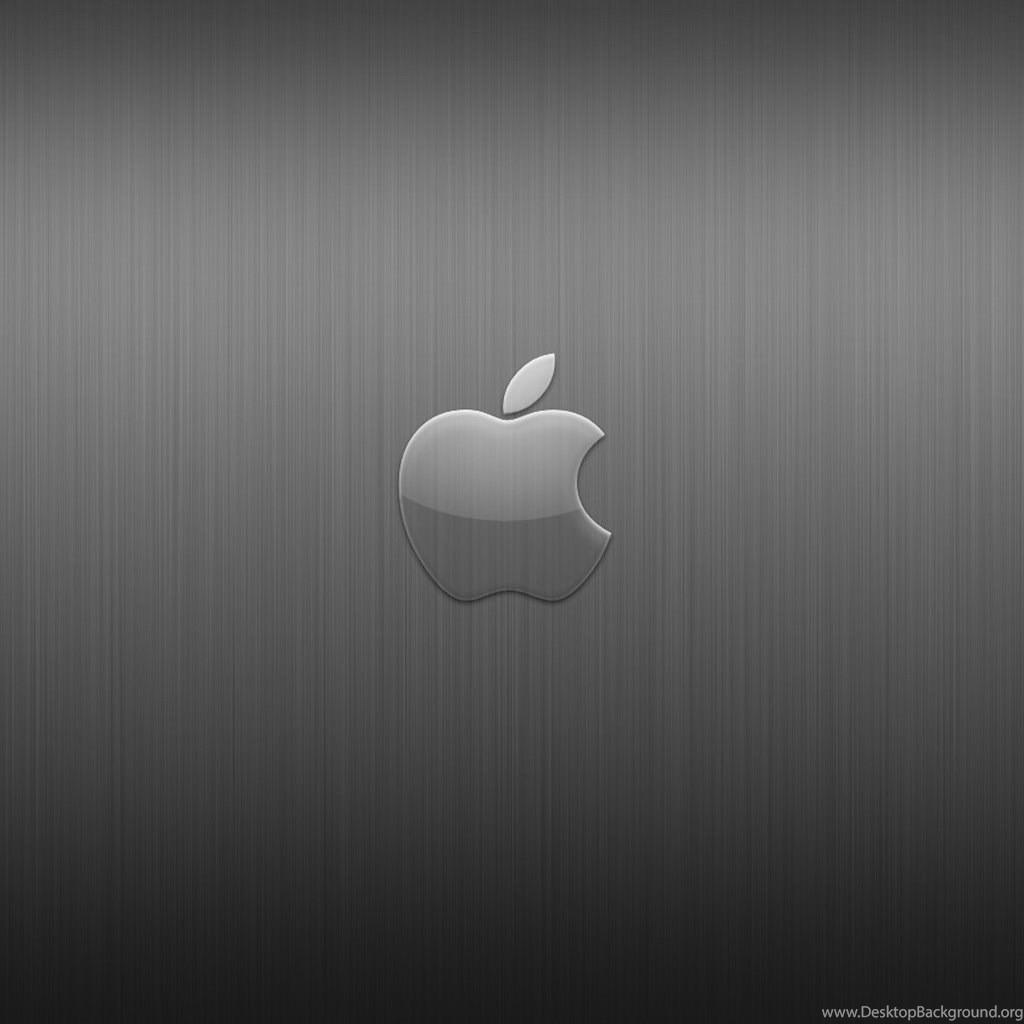 Is this helpful?
TwoCentsWorth
I use the 2018 iPad Pro 12.9 for 8-12 hours a day for work and play. To set it up, I just set my iPad Air next to it, and it quickly and automatically transferred everything (apps, settings, etc.).The sound system is beyond belief, with an incredible depth and breadth and richness. I've had systems with surround sound that didn't sound as good as this tiny critter. (I was astounded, while watching a movie, when a truck drove across the screen, from right to left, and the sound started in the right speakers and moved to the left speakers as the truck crossed the screen.) I have hypersensitive hearing and can turn this down very low and still hear every sound and word perfectly.You're just smashing, Apple! Thank you. (Plus, your little iPad Air is going on four years now and is still going strong as a backup to this one.)
Is this helpful?
Amazon User
I had the last 10.5" ipad pro and just upgraded to the new 12.9. I had actually returned the previous gen 12.9 and switched to the 10.5 because it was too large. However, with the minimum bezels on this new ipad, the size is perfect. I love using it for reading news, browsing the web, imessage, netflix/youtube, etc. The screen is incredible, and it never lags. Apple doesn't have much competition for great tablets, and this new generation made the gap even larger. It's expensive, but if you have the money then it's a great device.
Is this helpful?
Charly
Apple is so far ahead of the curve when it comes to tablets that at this point they are competing with themselves. This thing is fast and the design is beautiful. It is also expensive but I don't regret buying it at all (got the 12.9 64gb wifi from apple). My only concern with the device is durability but I'll take really good care of it. 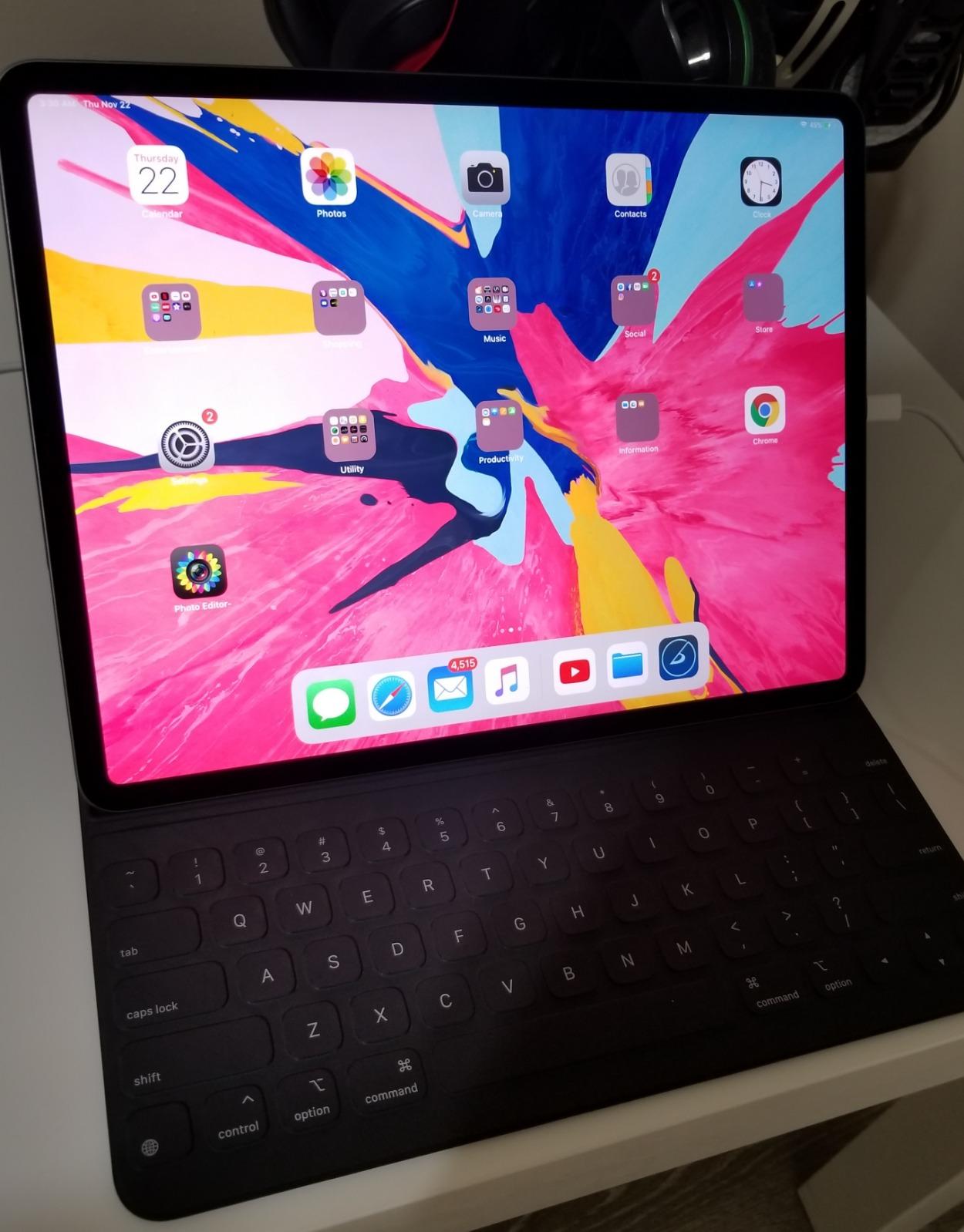 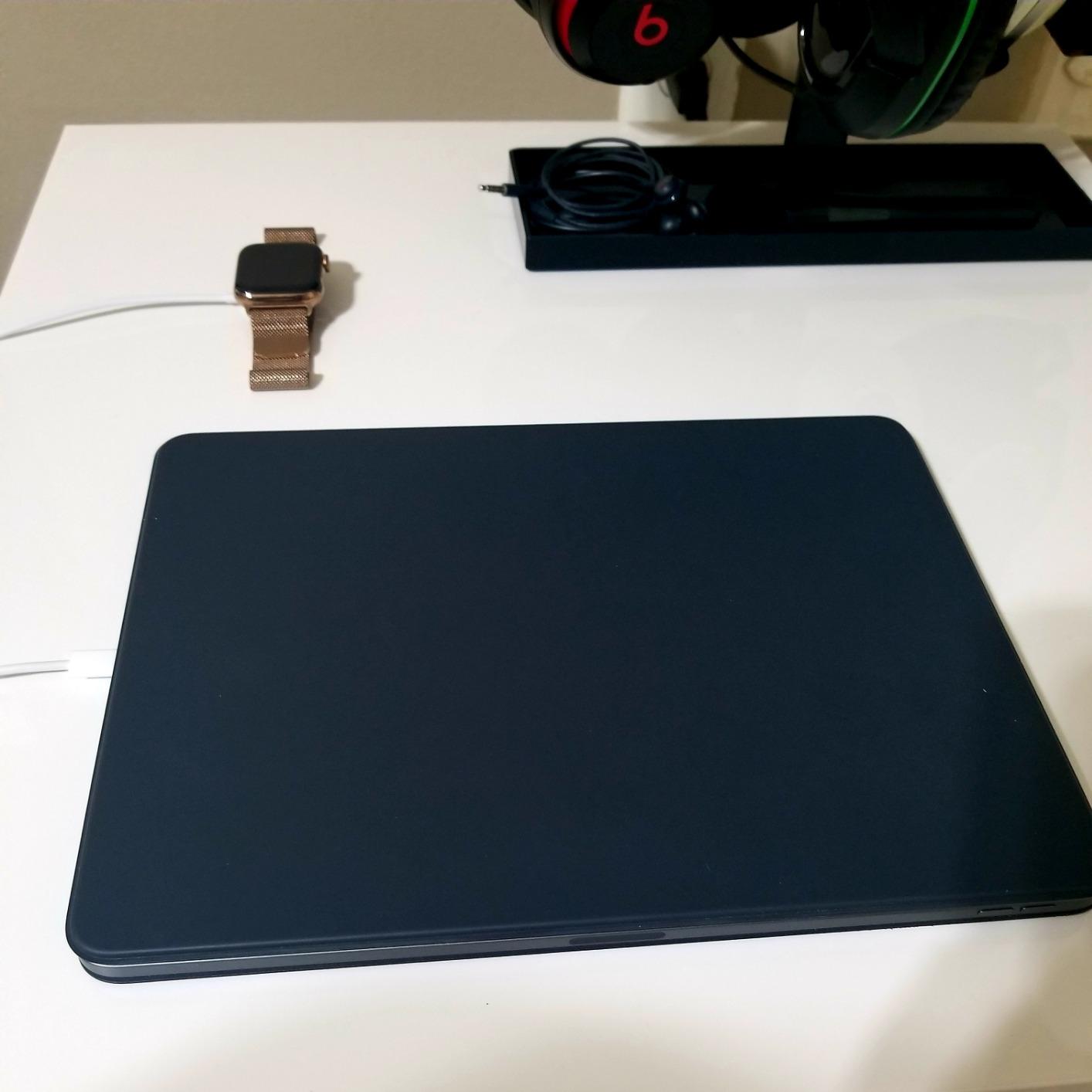 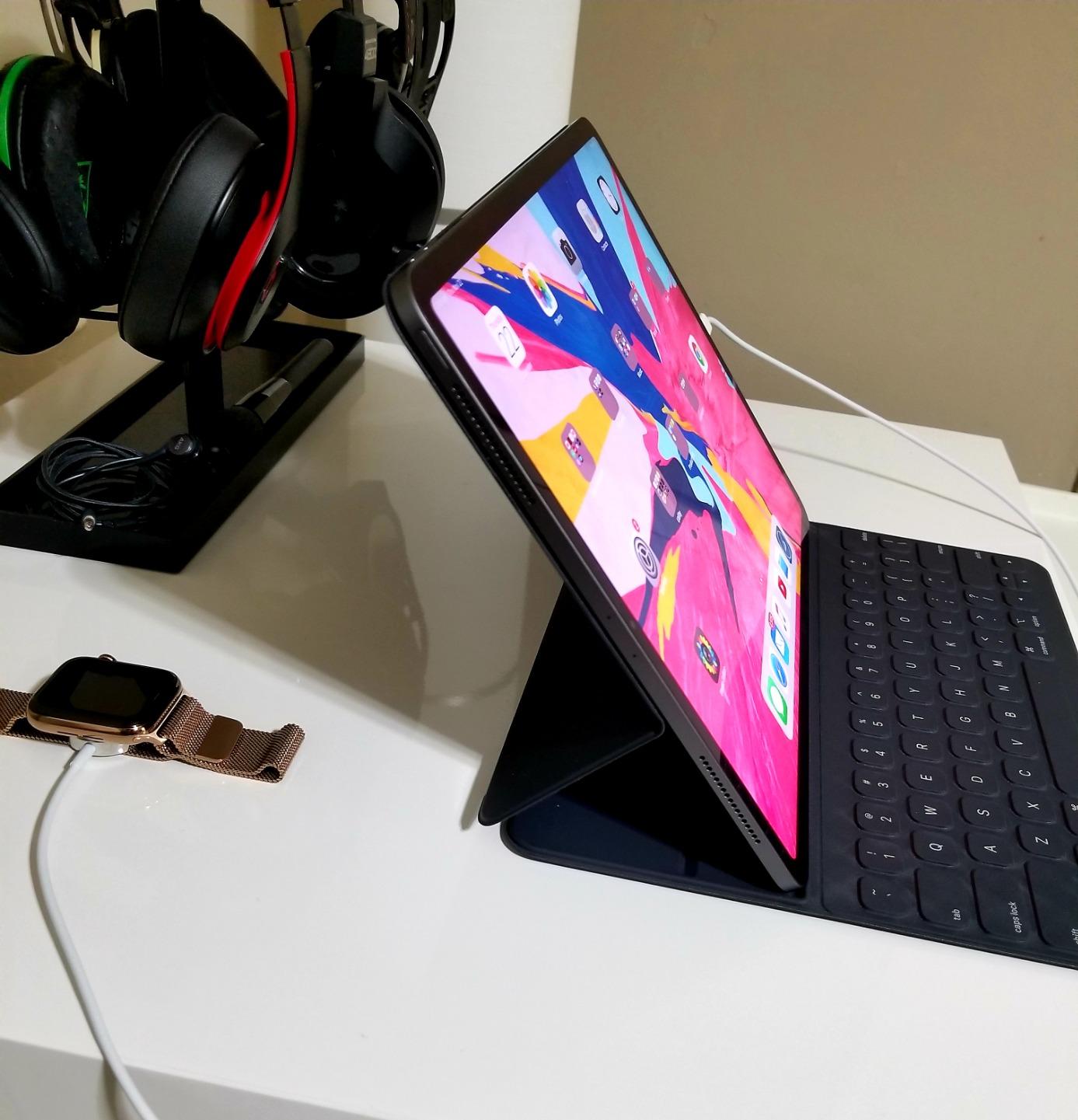 Is this helpful?
Chris Stevenson
I use my iPad every day for work, not as a computer replacement but as as enhancement. For the most part I review and annotate (many) documents, take notes during meetings, create vector graphics, and make presentations (it is better for that purpose than a laptop, IMO). And yes I also use it for entertainment.Because I use it so much, I decided to upgrade and I don't regret the decision despite the dent in my wallet. The form factor is seriously much more of an improvement than I expected; my wife still refuses to believe the screen is the same size as the previous model (it is). The apple pencil is a slight improvement in terms of operation -- it feels a bit nicer, and I won't miss the removable cap -- but the convenience of attaching it to the side of the device for storage and charging is a game-changer. I no longer have to remember to charge it over-night every few days. I also have the smart folio and it is an excellent improvement over the previous version.The iPad Pro is simply the best-in-class tablet device. The screen is beautiful, it is crazy fast, and the apps are excellent. Since I store my files on iCloud, integration is seemless: documents that I annotate appear on my computer within seconds after changing them. So it is not a laptop replacement for me, but I used it almost as much as I use my laptop.Yes there are some limitations. I'm a heavy Excel user and the iPad version is crippled since macros don't work. I can review and annotate others' spreadsheets, however, which I find more convenient then text boxes or cell comments. I also use LaTeX (rather than Word) and I haven't found anything close to Emacs + AucTeX. And I can't use R on the tablet.Regarding cost: yes , it is expensive. But over its lifetime it will more than justify the expense for me. And, like all Apple products, they are built to last (I still use a 2010 iMac at home as a spare computer and it is quite usable) and they retain their resell value.
Is this helpful?